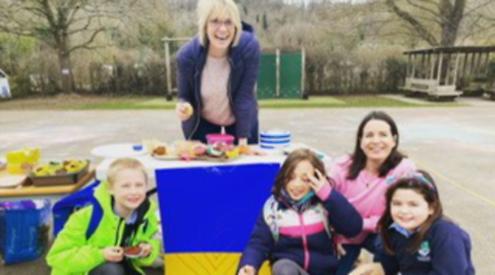 CHILDREN at two primary schools raised more than £900 for Ukraine.

Whitchurch primary raised £327 after parents and pupils baked cakes to sell at the school on Thursday last week.

The proceeds were donated to the British Red Cross appeal.

Parent Grainne McCormack organised the fundraising initiative and made a Ukrainian flag to dress the sales table.

Mrs McCormack, a nurse, said the fundraiser helped the children understand the effects of the Russian invasion.

She said: “Even the parents are finding it difficult to understand what’s going on so obviously it’s very hard for the children. Coming out of covid as well, the children are stressed out and thinking, ‘Is this world safe or not?’

“I was thinking about positive ways to help them try to understand and asked the parents if we could do a cake sale to show the children we could do something to help.

“It was a really positive day and helped the children understand that we can help people less fortunate than us.

Meanwhile, pupils at Peppard primary raised about £600 with a book sale on Friday.

Freya Woodhouse, 11, came up with the idea and school councillors Beau Gedney, 10, and Arthur Woodhouse, eight, offered to help.

Freya said: “My sister and I came up with the idea of doing a book sale so we asked people to bring in up to three books to donate. We made a stall and organised the books — it was a lot of fun.”

They sold each book for £1 each and donated the proceeds to the Disasters Emergency Committee’s Ukraine Appeal.

Headteacher Nick Steele said: “Freya approached me at the school gate with the idea and the school councillors all got together and organised it, collected the books from the classrooms and set up a little stall — it was as simple as that.

“I’m really proud of them. Our value for this term is compassion and the children are clear that it’s not just about feeling sorry for people but it’s doing something about it.

“We understand that it’s not going to change the world but it will change a little bit of it. It’s empowering people when they come up with ideas — it’s about showing we can do something.”

Pupils at the school were dressing in blue and yellow today (Friday) to show their support for the people of Ukraine.