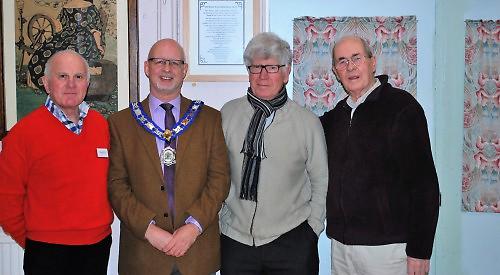 It follows the installation of a £60,000 new roof at the hall in Gallowstree Road last summer.

The building was closed for six weeks in August and September while the work took place.

It was carried out by a specialist contractor which removed the original roof tiles and asbestos underneath before installing new insulation and replacing the tiles.

The hall was then back in use but not officially opened until last month’s ceremony where South Oxfordshire District Council chairman Paul Harrison, who lives in Sonning Common, unveiled a plaque thanking all those who donated towards the cost of the new roof.

The rest of the money came from hall funds and private donations.

Clive Mills, chairman of the hall trustees, said: “It’s the first time the hall has had proper, modern insulation so we are hoping it will help to reduce the fuel and heating bills. The groups who use the hall have been complimentary about the quality of the job that has been done.”

It is hoped to decorate the hall interior this year.

The ceremony also marked the launch of a new initiative called the Friends of Peppard War Memorial Hall to find volunteers to help maintain the building.

Mr Mills said: “We wish to create a database of people so if we have some jobs to do we can let people know and ask for volunteers.

“We are hoping to maintain the quality of the hall and what we have got there and need help with gardening where the bowls club used to be.”

The hall is used by a number of organisations including Peppard WI, Chiltern Edge Horticultural Society, Peppard Revels, the Chiltern Players and Peppard Lunch Club.