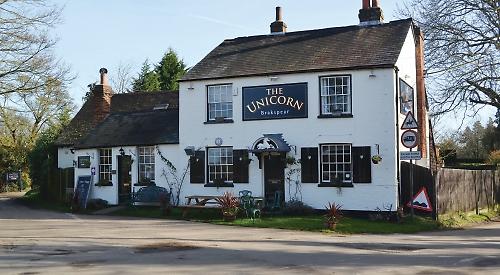 JOHN BLACKWELL and Sally Smithson have lived next door to their village pub for 22 years.

Despite the potential for noise from well-refreshed customers leaving late at night, the couple have never had reason to complain... until now.

But it’s not drinkers at the Unicorn in Kingwood that are causing the problem but four leylandii trees in the pub car park that border the couple’s front garden.

Mr Blackwell and Ms Smithson want the trees, the tallest of which is about 22ft, cut back because they say they are invading their garden.

But Brakspear, which owns the pub, says it can’t see the problem and has offered to pay only half of the £600 the couple have been quoted to trim the trees on their side.

The leylandii, the smallest of which is about 11ft,  used to be maintained by the pub’s gardener but they have been left to grow for a number of years.

Mr Blackwell and Ms Smithson didn’t like the evergreens putting part of their front lawm in the shade so they approached the pub’s tenants, Richard and Niki Clark, to see if they would help but they advised the couple to contact Brakspear.

Before making an approach, Mr Blackwell obtained the estimate, thinking the company would pay the cost.

But when he asked Brakspear’s property manager Tony Lewis, he was told that the company would only pay only half.

Mr Blackwell, who runs a management consultancy with his partner, said: “I approached Brakspear and said let’s get something done about it.

“It was just over £600 for the work and that is when Tony Lewis came back and said they were not planning to have any work done and if we wanted to get it done then they would pick up only half the bill.

Mr Blackwell, 60, said the bottom of the trees on the pub’s side were still being cut in order to maintain space in the pub’s small car park.

He said: “On the pub side they have trimmed them down for the car park but they have not taken any consideration of the neighbours’ point of view.

“We are trying to preserve our own trees and look after them. As we did this, it became more and more evident that the leylandii were sticking out like a sore thumb.

“The landlords have been really understanding but it’s not something they can take charge of because Brakspear owns the land, so that is where the responsibility sits.”

Ms Smithson, 52, sent an email to Mr Lewis about the problem but he would not budge.

She said: “Tony emailed back and said I couldn’t send him that email because it was rude and aggressive but there was nothing rude or aggressive about it.

“It just pointed out that leylandii are governed by law and are supposed to be cropped at two metres high.  I was shocked by the response. I was taken aback by his aggressive stance. It was completely uncalled for.”

He said: “They could have turned round to us and said ‘we know they can be a problem and, trust us, we will deal with it’.

“They would have come across as a professional and friendly business, but they did not want to do that.

“It’s the most obscure response I’ve had from a professional company.

“The big question is what kind of outcome were they expecting? They have four trees there which are going to get much bigger and the problem is not going to go away.

“It’s not a grey area, the law is clear. We are taking care of our own trees and then those trees really stand out. They aren’t just growing upwards but outwards as well, so they’re coming way across our garden. If they are left unkempt the problem is not going to get any smaller.”

Mr Blackwell said he was surprised at the response from a company that prided itself on customer service.

“We are big fans of local pubs and we think the Brakspear estate is something to be proud of in South Oxfordshire,” he said.

“However, they are saying ‘we will pick up half of your cost’, when it’s not our cost, it’s their cost.

“We are saying this is a problem that has got out of hand. It’s a type of antisocial behaviour.”

Mr Blackwell said the trees were in breach of section eight of the Antisocial Behaviour Act 2003 because of their height and has now submitted a request to South Oxfordshire District Council for enforcement action to be taken. Tom Davies, chief executive of Brakspear, said he did not believe the trees were having a negative effect on the couple.

He said: “As far as we’re concern they are not out of control.  I do not believe the trees have too much effect on them and we have no plans to do work on them. If they want work on their side we will pay half.”

Meanwhile, Brakspear is to appeal against an enforcement notice imposed on the Rose and Crown in New Street, Henley.

Brakspear argues that it should be given planning permission to turn the pub into a house. The company applied to convert the pub into a six-bedroom house in 2014 but the council’s planning committee refused consent due to the loss of commercial property in the street.