Pair raise £3,000 for charity with London to Brighton ride 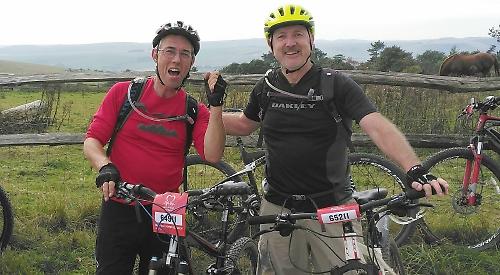 TWO men from Peppard raised £3,000 for the British Heart Foundation by cycling off-road from London to Brighton.

Matthew Davis and Nigel Hawkins rode 77 miles across a variety of terrain to complete the challenge, which is organised by the charity.

They were among more than 2,000 mountain bikers who started at Roehampton University, which backs on to Richmond Park, before riding for about eight hours to the finish at Brighton beach.

Mr Hawkins, who works at a wealth management company in London, said: “We set off enthusiastically through beautiful Richmond Park with the aim to get ahead of the masses and get to the North Downs village of Shere some 30 miles away before any ‘refuelling’.

“After then completing a challenging North Downs climb we enjoyed the descent to the relatively flat Downs Link bridleway for 20 miles before some big climbs and exhilarating descents to get over the South Downs to Brighton.”

Along the route Mr Hawkins went over his handlebars after hitting a tree root and Mr Davis suffered a puncture but the incidents caused only minor delays.

Mr Hawkins said: “It was a fantastic experience, particularly riding through the South Downs, which were stunning, but it was challenging too. Both of us suffered with saddle sores because we had not been on a bike for that long before.”

Mr Davis, who is joint manager director of estate agents Davis Tate and lives in Church Lane, and Mr Hawkins, who lives off the B481, go mountain biking in the Chilterns during most weekends.

The pair thanked their friends, families and colleagues for their support and encouragement.