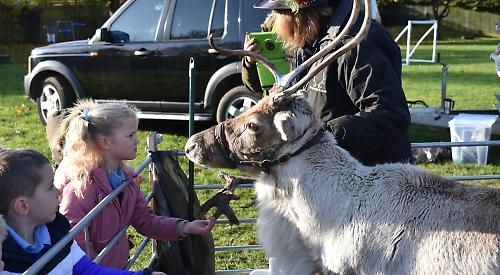 CHILDREN had the chance to feed reindeer which visited their school.

The reception class pupils at Robert Piggott Infant School in Wargrave were also able to stroke the four animals from Riverways Farm in Twyford.

The reindeer were brought to the school in Beverley Gardens by farm manager Andrew Cardy, whose seven-year-old son Edward is a pupil. It was the fourth year he has made the visit in the run-up to Christmas.

The Scandanavian reindeer, called Blizzard, Lightning, Snowy and Cloudy, are among 18 at his farm.

Mr Cardy told the children about the animals’ lifestyle and diet in the wild and the importance of their antlers.

He said: “It is all about the educational value we can bring to the school.

“We start with the geography and how reindeer have evolved and survived. They are prey animals, so they have to be clever in the way they use their senses.

“They use their antlers to protect themselves against polar bears and wolves, but they are also useful for finding food.

“For some of the younger children, this will be the first time they have seen a reindeer but the teachers get just as excited as they do and we get some really interesting questions.”

Reindeer can reach speeds of up to 40mph and have adapted to become strong swimmers in order to survive in the Arctic.

Their antlers fall off every year after the mating season and each set is unique.

Mr Cardy said: “A lot of people think they are called horns, not antlers.”

Sian Chalk, reception class teacher, said: “I am such a big fan of Christmas, so it is just as exciting for me as it is for the children.

“We will all go back into class and have lots of discussions about what we have learned.

“We are incredibly grateful to Riverways Farm for bringing them. It is always one of the highlights of the year for the school.”