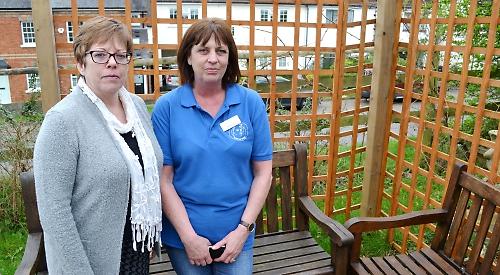 THE manager of a Henley charity has hit out at the vandals who broke into its headquarters and damaged buildings, fencing and equipment.

Teresa Garland, who manages the Headway Thames Valley day service for people with head injuries, arrived at work on Monday to find two benches missing from the front garden at Brunner Hall, off Greys Road.

They had been moved to Makins recreation ground, which is behind the building, along with a white plastic garden chair which was stolen from a locked courtyard. This had been smashed to pieces.

The yard is secured by tall gates with barbed wire on top so the vandals kicked a hole in a wooden fence then climbed over a shed with a corrugated metal roof, leaving a dent. They also took wire mesh and plastic sheeting that had been used to cover a pond and scattered it all over the field along with half a dozen paving tiles.

It took three staff about half an hour to clean up the mess and they now plan to lock the benches together to stop the same thing from happening again. The incident, which has been reported to the police, happened at some point over the weekend.

Neighbours said they had heard loud noises coming from the site on Sunday afternoon. Ms Garland said: “When I first saw it, I thought we’d been robbed. My first instinct was to make sure they hadn’t broken into the main building, which fortunately they hadn’t.

“It was a really horrible feeling — I couldn’t believe anyone would do something so mindless and stupid.

“We were lucky that it wasn’t worse but it was quite an inconvenience to put it right. Whoever did this went to a lot of trouble for something so petty.”

Police will be looking at footage from CCTV cameras at the neighbouring scout hut, which is used by the 1st Henley Scouts, in the hope of identifying the culprits.

l A classical concert in aid of Headway Thames Valley raised £170. The event, called Music With Friends, took place at the Church of St Mary the Virgin in Hurley on March 12 and was organised by villager Barbara Moir, who played harpsichord, to thank the charity for helping her husband Paul after he suffered a brain injury last year.