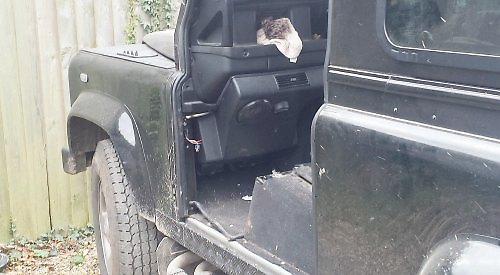 TWO Land Rovers were stripped by thieves for parts within days of each other.

The Defender vehicles are believed to been targeted as the model is no longer made so a black market in parts has developed.

Richard Underwood, from Peppard Common, found the doors, seats and bonnet of his vehicle missing in the early hours. Just days earlier Richard Clark, who runs the Unicorn pub in Kingwood found his black Defender with the doors and seats missing. It had been parked in the car park at the pub off Colmore Lane.

Mr Clark, who runs the pub with his wife Niki, said the thieves removed the headlights to disable the alarm system and took out the back windows.

He said: “They were obviously very experienced in doing this and getting it done quickly. They knew how to take the headlights out and then disable the factory fitted alarm.

“I’ve spoken to other people about it and there seems to have been an inordinate number of people in the area having the same thing done to them.

“I think it’s about 13 people who have had problems and that’s just in the last few weeks. It’s a worry that so many Land Rovers are being targeted and the police need to do something about it.”

Mr Clark said this had led to an increase in the value of the vehicles but also in the cost of spare parts.

He believes his vehicle, which he bought for £18,000 four years ago from Berkshire Land Rover in Maidenhead, is now worth £22,500.

Mr Clark, who bought the Defender after using Land Rovers while serving in the army, said the damage to the wiring would be expensive to repair and the cost might make it a write-off.

“It must be because they have gone out of production,” he said. “If you look on eBay at the cost of the parts they are quite expensive. Because they are Land Rovers they get beaten up and these parts need replacing. I will probably end up losing because of this. It’s a 56-plate and had low mileage. It has done just under 54,000 miles.”

Mr Underwood, head of investment oversight at Invesco Perpetual in Henley, had been chatting with Mr Clark about the problem on the evening that his vehicle was targeted while parked on his drive.

He said: “Richard had shown me photos of his Defender because I had the same model and mileage. That evening I went home to make sure my security lights were working. We think that at around 2.30am guys came and did the same thing. We think it was the same crew.”

Mr Underwood, 46, said they had also immobilised the alarm on his vehicle by taking headlights out.

He said: “They’ve brazenly gone on to my gravel drive outside my son’s bedroom window. I’m glad we slept through it because of how brazen they were.

“People need to be warned about it so they can park with their front lights against a wall so they can’t be removed and the alarm disabled.”

Mr Underwood said he had been quoted £8,000 for replacement parts.

He said: “Clearly sourcing the parts is hard because they’ve stopped making the vehicle.”