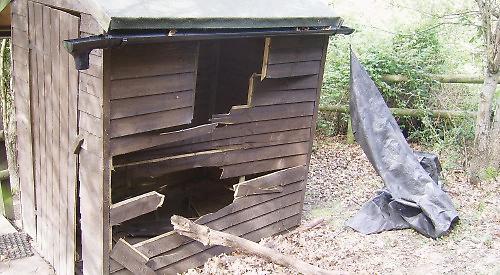 VANDALS smashed up and set fire to outdoor play and teaching equipment belonging to a Henley nursery school.

Staff at the Old Station Nursery, off Fair Mile, arrived at work on Thursday last week to find their forest school, which is based in woods on the hill behind, had been attacked during the night.

The culprits set light to a circle of benches where the children sit and listen to stories or learn about nature and the outdoors.

The seats, which consisted of wooden planks balanced on logs, were reduced to ashes.

The vandals also smashed holes in the side of a wooden shed and damaged a portable toilet inside.

They also set fire to the dens which the children had built around the base of trees using interwoven twigs and branches.

The nursery has been running forest school sessions twice a week for the past three years. Children are taught a range of skills including how to build a camp fire and make a shelter as well as climbing trees and identifying flora and fauna.

Sarah Steel, managing director of the nursery, said: “The girls came in and saw smoke coming from up the hill so they went to have a look and found everything still smouldering. This was really spiteful because the children had built lots of dens and whoever did this just pulled them apart and burned them.

“It’s not worth a great deal but Louise Brown, our forest school leader, has put a lot of time, effort and enthusiasm into it over the years.

“It has taken a while to build it up to this level so it’s not just a case of waving a magic wand and hoping the insurance will cover everything.

“It smelled a bit like a flammable liquid had been used so it’s clearly very deliberate.

“We’re trying to fix it as quickly as possible and in the meantime we’re trying to do the best we can with outdoor lessons on the playground.”

Ian Gallifant, of Blandy Road, Henley, whose three-year-old son Edward attends the nursery, called the vandals “selfish”. He said: “There was nothing of any financial value there but the value to the children is enormous and now they won’t be able to use it until it gets sorted out.

“The staff are very upset because it’s something they really cherish. All the parents have been talking about it and they’re pretty disgusted.

“It’s also very disappointing for the children as they find it very rewarding to take part in the forest school.

“This was such a selfish and stupid act and the victims are young children, which is so wrong.

“It is a great nursery which goes above and beyond the normal level of care and is very focused on outdoor activities. The children love putting their boots on and going up the hill to the forest school so it’s a great asset.

“From their point of view it’s both fun and educational. There’s nothing better than toasting marshmallows over a fire on a Tuesday afternoon. I hope it’s back up and running as soon as possible.”

Police are investigating the incident and hope that a neighbour may have seen or heard something suspicious.

Meanwhile, a Henley independent school has installed CCTV cameras and security lights after its forest school was vandalised twice in a year.

The area, which is behind Rupert House School’s playing fields at the bottom of Fair Mile, was targeted during last year’s summer holidays and again just over a month ago.

On both occasions, the culprits smashed equipment and damaged the boundary fence.

Kim Rawlinson, the school bursar, said he once challenged a gang of more than 10 teenagers who had gathered at the site and they fled as he approached.

He said: “It’s quite distressing because it creates more work for us and the site is popular with pupils.

“We often find beer cans scattered around but it’s hard to do anything without putting up a barbed wire fence, which is hardly the answer.

“It’s just bored youths who’ve decided, in their infinite wisdom, that it would be fun and clever to destroy something.

“I can’t understand their motivation — it would make sense if they were just sitting and chatting but the vandalism is just pointless.

“We reported it to the police and they were happy for us to put cameras up. It’s frustrating but hopefully they’ll prove an effective deterrent.”