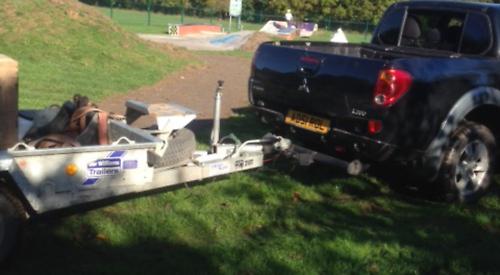 THE skate park in Sonning Common has been attacked by arsonists for the second time in three months.

Several wooden pallets were set on fire in the latest incident, which happened at Bishopswood sports ground on Wednesday evening last week.

The suspects are a group of young men who are believed to have driven round the area in a car while playing music loudly.

Several empty metal canisters of laughing gas were later found at the scene.

The £100,000 skate park has not been closed but a section has been cordoned off where the concrete has been damaged from the heat of the fire.

In August, a gang of vandals stole three golf buggies from Caversham Heath Golf Club which they drove to the skate park and smashed up with some fencing, bins and benches before setting the whole pile on fire, causing £10,000 damage.

Sonning Common Parish Council is offering a £400 reward for anyone who comes forward with information which leads to the arrest and conviction of those responsible for the latest incident.

Council chairwoman Carole Lewis, who led the working group that raised the money for the skate park, said: “Right in the middle of the half-term holiday, thoughtless vandals have damaged the surface of our skate park once again.

“Hedgerow twigs and branches were used to fuel the flames. Why was this necessary? If these hooligans were cold, surely they should have returned to their homes?

“One thing for certain is that the perpetrators would not have been skate park users as they would not have wanted to damage this much-used facility.

“I have no idea why a skate park would be the place to have a party and burn it up. Surely somebody locally must know who was involved?

“Protecting these vandals is only going to perpetuate matters. The community must do all it can to bring the thugs to justice to make sure this does not happen again.”

Parish clerk Philip Collings said the cost of the repairs was not yet known.

He said: “A crowd of young chaps apparently turned up and found a lot of timber. They burned it in the middle of the concrete and they left a lot of laughing gas canisters around.

“It did cause some damage but it’s not as bad as last time. There is an 18in diameter piece of concrete which we are now looking to get fixed. It’s not as bad but it’s still a nuisance. We will have to pay the first £250 of any insurance claim.”

After the previous incident Mr Collings claimed that Thames Valley Police “could not be bothered” to investigate it properly and he later received an apology.

He said he was more hopeful this time.

Mr Collings said: “We have some information so hopefully we will get somewhere with it. It happened some time in the evening and we know the crowd arrived by car.”

He said some of the wood used in the fire had been left in a nearby hedge by workmen from SSE after cutting down trees growing under power lines a few months ago.

Mr Collings said: “When they were done we noticed that they had left many of branches lying in the hedge.

“[We] made several calls and received assurances that they would return and clear up but this never happened so these miscreants had a ready supply of dry firewood.”