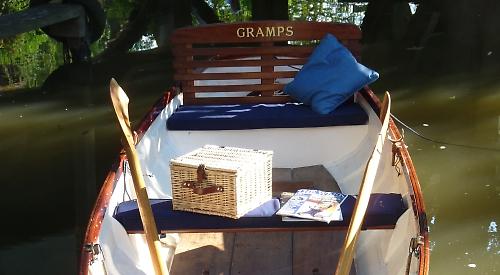 A WOMAN has told how a boat bought in the memory of her father was stolen and stripped before being dumped.

The thieves launched the 16ft skiff from amenity land off Wargrave Road, Henley, and rowed it upstream to Marsh Lock where it was stripped of its valuables.

They took the oars, rowlocks and an antique seatback made of varnished mahogony with the words “Gramps” written on it in gold leaf.

The theft happened between Boxing Day and December 28.

Owner Gillian Nahum, of St Andrew’s Road, Henley, only found out about it by chance while attending a party.

She said: “I was asked some advice about boats and someone said one had been found — and it was my boat that was being described to me.

“We had been storing the boat for the winter. The piece of land is closed from the roadside so clearly the thieves had come by the river. They probably spotted it and realised nobody lived there.

“They must have launched it and somebody obviously rowed it upstream to Marsh Lock and decided they would get it out of the water there as there are steps. I’m told they must have been scared by a dog barking and dumped it.

“When we found it, it was full of water as it had been raining.”

Mrs Nahum’s father died in 1998 and she bought the boat a year later as something for her two children to remember him by.

She had the skiff customised by boatbuilders Henwood & Dean.

Mrs Nahum, who has run Henley Sales and Charter since 1992, said the theft was reported to the Environment Agency, which is responsible for the river.

She added: “I have always felt that in Henley, and particularly by the riverside, that you shouldn’t have to bolt everything down and put up CCTV as that’s not the way I want to live my life.

“I am disappointed by what happened as the boat and seatback have great sentimental value.”