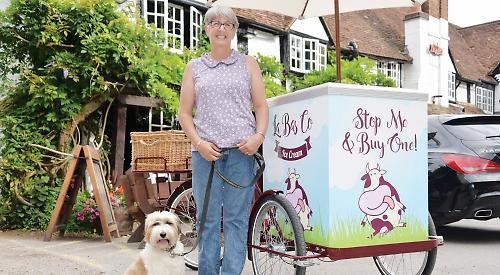 A WOMAN who sells ice creams from a specially-adapted tricycle is appealing for information after the vehicle was stolen.

Kathy Drogemuller, who founded La Bas Co after being made redundant from her IT job, realised the £3,000 Pashley No 33 was missing when she went to collect it on Friday.

She had left it in a storage yard in Sonning the night before and suspects it was pushed on to a van or lorry and driven away.

It has a battery-powered freezer on the back so is not safe to pedal on roads, especially hills as the brakes cannot cope with the additional weight.

Mrs Drogemuller, 57, who lives in High Street, Sonning, with her husband Tony and three adult children, has reported the theft to the police but does not expect the tricycle to be recovered as there is no CCTV footage of the theft and nobody witnessed it.

She has business insurance but is waiting to hear whether this covers the tricycle itself and may have to pay the cost of a replacement, which she has ordered and should arrive within a month, from her own pocket. In the meantime, she is running her business from a second tricycle of the same make which she purchased as a back-up and for larger events where two vehicles are needed and her children can run the second.

She will continue to serve the public from her pitch next to the Great House Hotel on land owned by Sonning Parish Council and will be able to attend all the private functions for which she has been booked.

Mrs Drogemuller, who named the venture after her four-year-old Tibetan terrier Basco, said: “It’s been devastating and really quite heartbreaking.

“The business was very successful from the outset so we’re at least very lucky to have that second bike as we’ve been able to continue making sales.

“The tricycle is an unusual vehicle so it draws people’s attention and makes them think about booking it for their event but I suppose being distinctive might have made it a target as well. I’m still astounded as to how exactly they stole it. My husband was with me and was first to notice it was gone. He said, ‘Where’s the bike?’ and at first I thought he was talking about my Harley-Davidson but then I looked and realised it was the tricycle.

“I’m a magistrate and had to ring the court to say I couldn’t make that day’s session as I wasn’t in the right frame of mind.

“I was so cross that I would probably have jailed anyone with as much as a parking ticket!

“I felt utterly sick the second it dawned on me — my heart just dropped. I kept calm and just went through everything that needed to be done like reporting it to police and the insurers and planning for upcoming events by getting replacement scoops and business cards.

“The freezer isn’t fixed to it permanently but it’s not easy to remove and you certainly couldn’t have cycled it away.

“The thief couldn’t have been acting alone as I’ve had two strong men struggling to help me load it on to a van. I can’t imagine it would be possible without another vehicle and a ramp.

“I don’t think I will see it again. You’d like to think someone might recover it from a ditch or something but it’s doubtful. The only good thing is that I’ve had a chance to rethink the branding for the new one and advertise all the flavours more prominently.”

Mrs Drogemuller has been bombarded with messages of sympathy after advertising the theft on social media and says other people were targeted that day.

A car parked near the yard was broken into that night and had several items stolen while two men were seen loitering suspiciously around a bicycle chained up near the Bull in High Street.

She said the exact same make and model of tricycle was stolen from Bill’s restaurant in Reading town centre a few weeks earlier so the thieves may have been stealing to order.

She said: “The whole community has been absolutely disgusted and it’s phenomenal how much support I’ve received. People have been hugging me when I’m out selling and saying they’re so sorry to hear the news. I’m choosing to focus on that positive element rather than the horridness of the theft.”

Anyone with information should leave a message at www.facebook.
com/labascoicecream