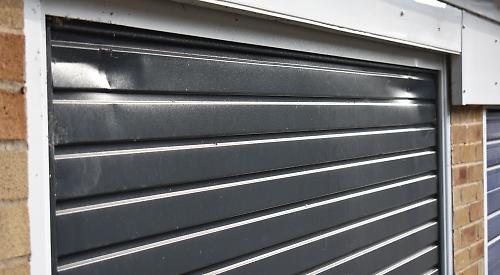 BURGLARS broke into 17 garages in one street and stole possessions including bicycles, tools and toys.

The raiders are thought to have used a crowbar to prise open the metal up-and-over doors at the row of garages in Ancastle Green, Henley, in the early hours of Wednesday last week. Several doors were damaged.

Sandra O’Halloran, who chairs the Ancastle Green Residents’ Society, went out with her dog at 5.30am and noticed two of the garage doors had been bent.

“It was only when it came light that we noticed almost every bay had been damaged,” she said. “Some of the garages have got four point locks on them so I don’t think they got into those but some have only two.

“We have auxiliary lights in the darkest area and they had broken those off and then taken them away.

“We don’t know how much has been stolen because nobody has really got an inventory. Hopefully, the residents have got their contents insurance but for the doors we’re going to have to claim for those, sadly.

“I know there’s no chance of catching the burglars because we haven’t got CCTV.

“I think there must have been more than one person because otherwise they wouldn’t have been able to carry away what they did. I’m absolutely staggered nobody heard anything.”

Mrs O’Halloran, whose own garage wasn’t affected probably because it is under a light, said her neighbours felt “violated”.

“I don’t think people who steal things or damage things understand how ghastly it makes you feel,” she said.

The residents hope to have CCTV installed this week.

Mrs O’Halloran added: “At this time of year it’s getting darker and it’s the time opportunistic thieves will try their luck. Make sure things are locked up and if you need one, get an alarm.”

Another resident, who didn’t want to be named, said his garage door would need replacing.

He said: “They stuck a crowbar in the top and then forced the door open.”

The man said he had been using the garage to store toys from his son’s childhood which he had planned to pass on to his own child.

“They also stole all my tools from my tool chest,” he said. “They took anything they could get their hands on. It’s not the financial value, it’s sentimental.”

He said the burglars must have had a vehicle because of the quantity of possessions that were taken, adding: “I think people should be aware that there’s people stealing from garages.”

Anyone with information should call Thames Valley Police on 101, quoting crime reference number 43190337874.