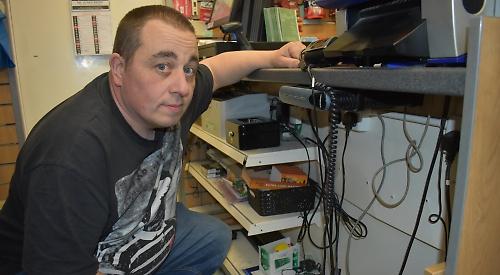 A VILLAGE shopkeeper has told how he confronted a gang of masked raiders who broke into his store during the night.

Gavin Caple and his wife Sharon, who run Binfield Heath Stores, were in bed upstairs when they were woken up by the shop’s alarm going off.

They went down to investigate and Mr Caple confronted the thieves just as they were getting back into their getaway car with about £1,000 worth of cigarettes.

He decided not to chase them as they drove off.

The raid happened at 12.45am on Thursday last week when three men dressed in black and wearing balaclavas or hoodies smashed a lock on the front door of the shop.

They then ripped the cigarette cabinet from under the counter and loaded it into their Mini outside.

The Caples, who have run the business for 10 years, then came downstairs.

Mr Caple said: “We were in bed and the alarm went off. We could hear banging inside the shop.

“The pair of us jumped out of the bed and were downstairs within a minute-and-a-half.

“As we went into the shop there were three geezers in a Mini and the last one was just getting in.

“In that time they’d got through the door, pulled the cigarette cabinet out and got it in the back of the car.

“The cabinet was hanging out the back of the Mini. The last one was getting in and said, ‘why don’t you eff off?’”

Another man then got out of the car and pushed the cabinet all the way in before the car was driven off towards Shiplake Row.

Mr Caple said: “They didn’t put the car’s lights on and as soon as they started driving I was on the phone to the police. I just wanted to run after them and get my stuff back but Sharon stopped me and thank God because you never know what’s going to happen.

“My wife was shaken up. At the end of the day no one was hurt, which is the main thing.”

He said the kiosk was screwed to the back of the counter and was locked every night. He added: “The door lock was smashed to pieces all over the floor. The police took prints from the lock and the door.”

Mr Caple said he would now be installing CCTV at the shop.

“We’ve never had any problems here and we don’t carry that much stock,” he added. He praised villagers for their support, saying: “People have been brilliant. You couldn’t ask for more genuine, lovely people who were worried about us.

“So many are offering to help — it’s a proper little community, which is lovely.”

The door will be replaced by the Phillimore Estate, which owns the shop. Mr Caple said the Mini was light coloured, possibly white, and may have had five doors. Two of the gang were over 6ft tall and slim.

Anyone with information should call Thames Valley Police on 101, quoting reference number 35 of January 9.