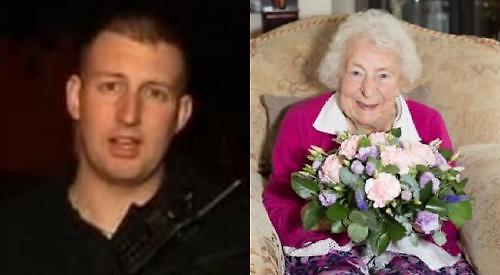 A CARER has been acquitted of causing the death of an elderly woman and a motorcycle policeman in a crash near Wargrave.

The jury took just over an hour to find her not guilty on two counts of causing death by careless driving of 91-year-old Gladys Goodwin, who was her passenger, and Pc James Dixon, known as “Dixie” from his appearances on TV’s Road Wars.

Miss Jasulaitiene, 36, of Talavera Close, Crowthorne, broke down in tears as the verdicts were delivered.

Miss Jasulaitiene was driving Mrs Goodwin home from Slough to Wargrave when she went to turn into Blakes Lane and was struck on the passenger side by a Kawasaki bike ridden by Pc Dixon.

The Toyota flipped and landed onto its roof. Both Mrs Goodwin and 39-year-old Pc Dixon were pronounced dead at the scene.

Experts said that Pc Dixon, who was on a surveillance training operation, may have been travelling as fast as 97mph in the 50mph zone and his bike’s headlights were not on. He was also wearing dark clothing and was designed to be “inconspicuous” due to the nature of the training.

Ellie Fargin, prosecuting, said Miss Jasulaitiene coasted as she made the turn and did not take sufficient time to check it was safe.

She said: “As your wheels are crossing the white line, Pc Dixon’s bike is between 88 and 107 metres away. Why on earth did you coast into that road rather than accelerating into it? Realising he was coming, you didn’t have time to brake.

“Your driving on the approach to that junction shows that you were unconfident and confused about where you were going.”

Miss Jasulaitiene described herself as “a very confident driver” and said she had approached the turn-off with care. She said she did not see Pc Dixon or his bike.

She said: “I always drive carefully, especially when I have a passenger in my car. She was an elderly lady, so I took extreme care. It is my responsibility to take her home safe. There was a lane before Blakes Lane. It was not a big distance, so as I was coming up to the first lane I thought that was my lane to turn so I slowed down and indicated. Then I realised that was not the lane I was needing. Then I saw Blakes Lane. I positioned my car and did my checks. I looked in front of me and then I did my checks again and went to turn.

“At the time, I thought I did stop. Maybe I am mistaken. I slowed right down and that is when I thought I had stopped, but I hadn’t. When I saw the road was clear I turned right. I didn’t want to rush because I had Gladys next to me.”

Miss Jasulaitiene said she thought she had completed the manouevre when she regained consciousness.

Her first memory was of voices outside the car asking if anyone was alive. She recalls being dragged from her vehicle by two pedestrians before being treated by paramedics.

Miss Jasulaitiene added: “I must have been unconscious for some time because when I woke up the car was upside down. The air bags went off and I had a face full of glass. I tried to call for Gladys but she wasn’t moving. I didn’t know at that time if she was alive. I was in shock. I undid my belt and I dropped to the roof.”

Several witnesses who had been driving behind Miss Jasulaitiene told the police that they had not seen the bike. During his summing up, Judge Paul Dugdale said: “The line of sight was 350 metres in a straight line. The Aygo would have had a clear view down the road for nine seconds. All the experts agree the bike was in view.” Ian Bridge, defending, said: “It has been said that the bike was there to be seen. The impact left three people at the scene believing there had been a bomb or an explosion, such was the force of the bike.

“It is my submission that you are not sure that Miss Jasulaitiene’s driving fell below the standard of a careful and competent driver. Her driving did not make any real contribution to the dreadful thing that happened.”

Miss Jasulaitiene, who is originally from Lithuania, did not work for three months after the collision due to depression. She told the jury that she had experienced episodes of distress when she saw motorbikes on the road but had to overcome these as her daughter relied on her to get to school.

Pc Dixon’s widow Samantha, who gave birth to a boy three months after the collision, said: “While we are disappointed with the verdict, regardless of the outcome it would never have changed the most important fact about this tragic case and that is myself and the rest of James’s family have lost a husband, father, son and brother. He was also a friend to so many.

“Thames Valley Police have lost a committed and highly professional officer and respected colleague. He will be forever missed and never forgotten.”