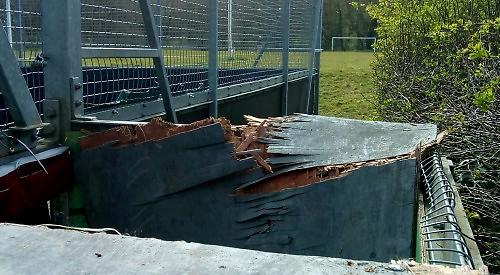 The damage to a wooden board behind a goal was discovered by Lisa Grant, general and financial manager, at the facility in Lawson Road on Thursday last week.

Earlier, she had told a group of young men to leave the private pitches, which are temporarily out of use in order to comply with government rules on social distancing due to the coronavirus outbreak.

The tiger turf pitches are surrounded by a 9ft wire fence and there is padlock on the main door as well as signs to tell people it is closed. Mrs Grant said: “The goalmouths protrude out from the fencing and they have a wooden board on top, which is quite thick and it had been smashed.

“You would have to spend quite a bit of time jumping up and down on it to break it, so it was deliberate.

“I noticed the damage after they had left, so I didn’t confront them about it.”

Mrs Grant said it was the second time that week that she had to tell youths to leave. She said: “I could hear banging and there were four young men who were teenagers, or in their early twenties, who said they were collecting their balls and I said ‘no you’re not’ and it was obvious they weren’t.

“I told them they were on private property and, more importantly, they shouldn’t be here because of the lockdown.

“There were four of them, so they were obviously not social
distancing.

“The boards have been broken and I have also heard rumours that people have used it as a space to supply others with narcotics when we are not there. It is annoying but these people shouldn’t be out anyway. It is a tall fence and there are signs up telling people not to climb over it. If they do that and they slip they could hurt themselves.

Mrs Grant said the charity had to spend £900 three years ago following a similar incident.