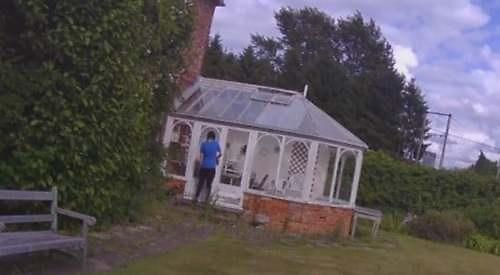 VANDALS have damaged a farmhouse and outbuildings in Sonning Common three times in the last month.

A group of youths have been recorded on CCTV walking around the property, off Reades Lane.

Owner Richard Pelly said the first incident occurred on Saturday, June 20 at about 5pm when up to eight vandals smashed glass around the site.

CCTV images show three youths sat on the grass at the property and another three walking around.

One, who is wearing a blue top, black tracksuit bottoms and trainers, can be seen looking into a conservatory.

The second incident occurred on Monday, June 22 at about 2.40pm when vandals are believed to have smashed about 26 windows at the farmhouse.

Mr Pelly saw the incident live on CCTV and called the police, who arrested four 17-year-old boys on suspicion of criminal damage.

They were found with support from a National Police Air Service helicopter and subsequently released under investigation, having been voluntarily interviewed under caution.

A third incident occurred on Monday last week between 4pm and 4.20pm when a group of between 10 and 15 youths broke more glass at farm buildings in the site while a worker, who was clearing the area for Mr Pelly, had been temporarily absent.

When the man returned, he found the youths and photographed them as they left the property.

CCTV had also captured three youths in hoodies walking and running around the site.

Mr Pelly’s worker also managed to take a picture of eight of the youths.

They can be seen walking along a path and shield their faces when they realise they are being photographed.

Thames Valley Police is appealing for information to help identify the youths involved.

Mr Pelly, who lives in Alderton, Northamptonshire, said that fortunately the farmhouse is installed with roller shutters to prevent illegal entry.

The total cost of the repairs to the buildings will be about £2,500 and he wants to pay it himself instead of using his insurance so his premium does not increase.

Despite this he hopes the vandals and their parents come forward to pay him for the repairs.

He is angry by how often the vandalism is taking place.

Mr Pelly said: “They just smashed up any glass, anything they could smash up. They were just being as destructive as they could be.

“I was taking a very kind attitude to the whole thing and didn’t want to get people a criminal record but that largesse is completely gone now. I don’t want to give children a criminal record for doing something rather petty and silly but if it’s repeatedly happening then they’re bad and need to be dealt with.

“We have been very generous to the village. But the village have got to look after their young. They can’t deny responsibility for their young — it’s totally wrong.

He added: “The parents ought to know where their children are. Really, that’s what it boils down to. We don’t want to ruin their lives but it needs to be addressed.”

Mr Pelly said he wants the culprits to come forward and face justice before the situation gets completely out of hand.

He said: “I want the parents and children to come forward, to be named and shamed and pay for all the damage between them. Someone will get hurt soon because there’s broken tiles and glass all over the place. There’s hardly a pane of glass on any of the farm buildings now because they’ve all been smashed. The ideal thing would be for the children to come and clear it all up but that’s impossible in these days of modern health and safety.”

Mr Pelly appealed to the youths directly, adding: “Why are you doing this? It’s just wilful. You would be upset if I came and smashed up your bedroom or mobile phone. Just go and kick a football about. I don’t want this to be repeated because it’s happened several times over the last three years.”

A gang of six teenagers was captured on CCTV vandalising the property in July last year. The police were informed and the parish council uploaded the images to its Facebook page to see if anyone recognised those responsible.

Their parents came forward and agreed to compensate the owner and discipline their children.

Mr Pelly owns the property, which comprises five buildings, with his two brothers and it has been in their family since 1955.