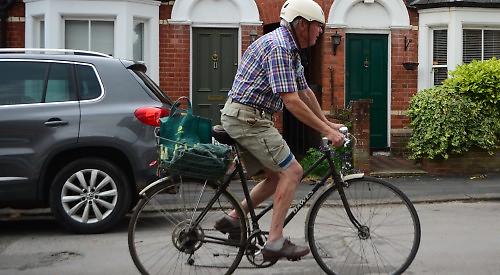 A MAN has been reunited with his vintage bicycle just days after it was stolen.

William Shine, 78, had parked the
40-year-old Dawes bike in front of his house in Park Road, Henley, when it was taken. He had been leaving the machine there for 10 years without any problems.

Staff at builders merchants Jewson found the bike abandoned in front of their base in Reading Road but did not know who the owner was until they read about the theft in last week’s Henley Standard.

Mr Shine said: “I’m absolutely delighted to be reunited with my old friend. I was so glad it was not left in pieces. I’ve now bought two locks, one for the front wheel and one for the back, to make sure this doesn’t happen again.”

The bicycle, which has 10 gears but only three that work, originally belonged to Charles Wiggin, who won bronze in the coxless pairs at the 1980 Olympics in Moscow, and his wife Sally, who lived in West Street.

Mr Shine, a retired wine merchant who has lived in Henley for 30 years, met Mr and Mrs Wiggins through Upper Thames Rowing Club when they were all members.

He found the bicycle in their garden when he was doing some work for them and Mrs Wiggin said he could have it.