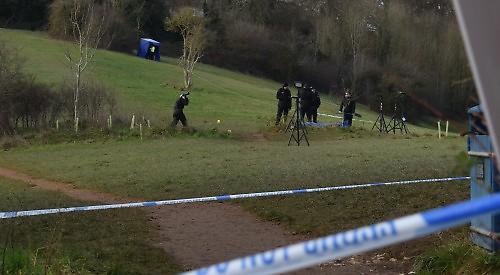 A TEENAGE boy was stabbed to death at a beauty spot where he had been led, a court heard.

Two boys, also in their teens, have denied murdering 13-year-old Oliver Stephens in a joint attack at Bugs Bottom fields, between Hunters Chase and Gravel Hill, Emmer Green, on January 3.

Reading Crown Court heard that Oliver, known to friends as Olly, was “lured” to the site at about 3.30pm and stabbed in the chest and back by the pair as a girl stood nearby.

They then fled, disposing of “incriminating” messages on their mobile phones and their clothing.

The defendants, who are both 14 but one was 13 at the time of the incident, cannot be named for legal reasons.

Alison Morgan, prosecuting, told the jury: “The attack had been planned by the defendants in the days leading up to January 3.

“The defendants were motivated by previous grievances that they had with Olly and they planned to attack him together.

“Olly was ambushed by the defendants. He was physically attacked by the boys with the girl standing nearby.

“They planned an attack — not some kind of consensual fight, this was an attack.”

Ms Morgan told jurors that although they might find the boys’ ages “shocking” it was not a defence.

She said that the messages had been exchanged between the defendants in the days before the incident indicating that both intended for a knife to be used in the attack to Olly. The younger boy believed Olly had “snaked him out”, meaning he had gone behind his back about something, and wanted him “set up”.

The defendants exchanged “hostile” messages with Olly who responded with similar hostility.

One message sent from a defendant said: “Oi, Olly suck your mum fam”. Olly responded to the older boy: “F**ck you”.

Another message to Olly said, “You’re a snake” and Olly responded: “Blud, I’ve done nothing.”

Ms Morgan told the jury: “Whatever it was that was going on with the pair you could see some kind of grievances with Olly.”

By the evening of January 1 there were references from the older boy about the use of violence such as “poking him in his head” and “see a knife go through the top of his skull”.

Ms Morgan said: “From that point onwards there was escalation from the defendants about what they were going to do, including using the knife.”

The older boy told the younger one to bring a knife to the meeting with Olly, she said. A few days before, voice notes had been exchanged on Snapchat, a social media app, between the defendants in relation to “the possession, handling and use of knives”.

On December 21, the younger defendant uploaded a video of a knife with a gold blade and a white camouflage cap.

Six days later, a video appeared of both boys in a park at 1.29am wearing face coverings. The older boy was shown holding a tree branch while the other one was “swinging a knife and trying to kick the other”, said Ms Morgan.

The next day there is another video of the younger boy with a black face covering and a black sheath in his waist band with a knife inside making a sign with his hand.

Ms Morgan said: “What does this show about the defendant’s attitude to holding a knife? They are acting in a dangerous and aggressive way. It shows you what they must have each known about each other when you consider what would go on to happen a week later.

“Was it likely to be a surprise to [one boy] that [the other] was in possession of a knife that he would use to stab Olly?”

On January 2, arrangements were made with a different girl at first to set up Olly.

The younger defendant asked the girl to pretend she had a crush on him to persuade him to meet her outside but told her that she “better not tell him”.

The girl said: “When do I have to do this? I feel like I’m part of a murder team” to which the boy responded: “Nah, it’s not a murder but just start trying to get close to him.”

Ms Morgan said: “These messages, despite his age at the time, show he knew perfectly well what was going on, what was planned and the consequences of what he was going to do.

“He was telling [the girl] that Olly snaked him out and that he had grievances. The messages carry on to the girl and he says, “Nah, don’t feel bad because the whole thing about Olly is deep sh*t,” and “he’s a f**king pagan”.

The other girl then got involved and agreed to help the defendants set up Olly.

In messages exchanged between her and the older boy, she said: “Honestly, I don’t care. I honestly don’t care if he f**king dies, the amount of sh*t he’s done to me.”

The defendant responded: “He’s going to get banged open if I see him. I don’t even care. If I see him right now I would probably kill him because he’s getting on my nerves.

“I’ll get him to lick my shoe or stab him or something. I don’t know or care. The things he’s done to you.” At about 5am on January 3, Olly offered the girl some cigarettes and they agreed to meet later on. At the same time, the girl was messaging the defendants.

She then tried to get Olly to meet her in Emmer Green but he kept saying no because his parents wouldn’t let him. The court had heard that Olly had been in trouble with his parents for being in possession of a knife.

Instead, she agreed to meet him in Bugs Bottom, near his home.

Later that day, the defendants met outside Budgens in Peppard Road on an electric scooter before meeting with the girl. Three other boys were also there but were not involved with the incident.

At this point, the girl sent a voice note to a friend and said: “Why am I scared, why? Kind of scared, not gonna lie.”

The group then walked down Kidmore End Road and Grove Road towards Bugs Bottom.

They went around Highdown School in Surley Row, where Olly was a student, and towards Tredegar Road.

Olly had messaged the girl to tell her she was taking a long time to meet him and she then split with the group to walk towards his home.

Ms Morgan told the jury to note that Olly was wearing a pair of sliders on his feet, adding: “They are like beach shoes… if he thought anything was going to happen to him he wouldn’t have worn shoes like that.

“He only thought he was meeting the girl and was unknowingly walking into an ambush.”

A cardiac nurse who was taking her dog for a walk in the field at about 3.30pm noticed two boys on an electric scooter “whizz past” her on her right side and “weave between her” and someone else on the path.

She continued to walk on the central path when she became aware of an “altercation” behind her.

She saw Olly and another boy dressed all in black about 100 yards away from her and they were coming together. She noticed six people were present but didn’t hear any “egging on” from where she was.

Ms Morgan said the nurse did hear Olly call out “bloody bu**ers” or “b*stards”, adding: “Olly was gesticulating and the boy in black was swinging his arms in a thumping action with his fists towards Olly but she didn’t know which arm or where the punch contacted.

“Olly retaliated with a fist back at the boy but his punch was more of an uppercut and it was his right arm.

“The boy raised his fist back and was hitting [Olly] on the right side of his face. [The nurse] could see Olly’s face grimacing but she didn’t see any injuries.

“She then heard a metallic ‘ting’ sound as if metal had hit something hard and then the fight just stopped and everyone dispersed.” The nurse didn’t see a knife and didn’t realise Olly had been stabbed. Another boy was with him.

The nurse then saw blood between Olly’s waist and hip and his top had risen up to reveal a patch of blood.

She told the other boy to ring for an ambulance as she tried to work out where the blood was coming from. She found “a hole that looked like a knife wound”.

Ms Morgan said: “[She] heard sucking sounds, which meant air was getting into [Olly’s] lungs the wrong way. Olly was floundering around and staggering and she tried to get him to go to the ground so she could try to treat and help him but he was trying to move away to begin with.

“She noticed shock setting in and he was going into cardiac arrest so she started CPR. Olly wasn’t saying anything distinguishable at this point.”

The nurse was carrying out CPR for 10 minutes before an ambulance arrived but Olly was unresponsive and not breathing.

Ms Morgan said the paramedics tried to treat him for 30 minutes before he was moved to the ambulance and specialists were called to the scene and emergency surgery was carried out.

However, his heart was not working and it had not done so for “a long time” and Olly was declared dead at 5pm.”

The boy who had stayed with Olly had run to his home so his family was there at the time of his death.

Meanwhile, said Ms Morgan, a man had seen the defendants, the girl and the two other boys leaving the area near Hemdean Road.

He said he remembered seeing the girl “strutting along” and looking back over her shoulder, adding: “She gave me the impression that she was a typical teenage girl who seemed a bit arrogant with these lads and a bit ‘look at me’ sort of.”

A post-mortem exam showed the wound to Olly’s chest was 9cm deep and had hit his right lung between his third and fourth rib. The wound to his back had also hit his lung between the ninth and tenth rib.

Forensic pathologist Charlotte Randall, who carried out the examination, said there was “significant” blood loss, causing disorientation and unconsciousness before death.

Ms Morgan concluded: “This was not an accident, this was a deliberate attack in which two stab wounds were inflicted.”

The trial, which is expected to last for five weeks, continues.