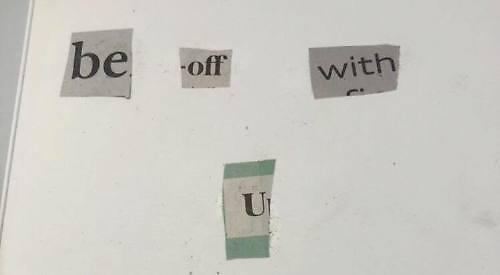 A COUPLE have told how a man waged a race hate campaign against them and their family.

Michael Read and Heidi Price, from Woodcote, said they felt “alienated” by the abuse, which included a “Christmas” card sent to them with a picture of a smiling monkey on the front with the word “selfie” and a message inside made from newspaper headline clippings which read: “Be off with u.”

They were speaking after Bryan Olliver was convicted of malicious communication following a trial at Oxford Magistrates’ Court.

Olliver, 48, of Bensgrove Way, Woodcote, was also found guilty of assault by beating for spitting on Mr Read and of assault by spitting at his mother. He is due to be sentenced on October 20.

Mrs Price, 42, who is of a mixed Jamaican and German heritage, said: “This racist bully was being judged by everyone in that courtroom and was found guilty.

“Racism shouldn’t be tolerated and it’s good we made a stand.”

Mr Read and Mrs Price, who have been together for about 20 years, said the abuse started two months before the card was sent to them on Christmas Eve 2019.

They said banana skins were thrown on their driveway and they were worried about their children, Poppy, 15, Izzy, 13, and Mrs Price’s son Joe, 22.

In October 2019, they received a letter with a message made from newspaper or magazine clippings which read: “We do not like or tolerate Romanian gypsy types in our st. You have devalued all our houses. The Croft Way Residence [sic]”.

Mrs Price, who owns a dental nurse agency, said: “Michael called me at work to say we had this weird letter and said to come home straight away.

“I put a picture of it on Facebook and it got so many comments and all my neighbours came round with gifts. They were horrified and said this wasn’t a representation of them. They were really embarrassed.” The couple called the police but officers couldn’t identify the culprit.

“They were really sympathetic and knocked around the street to see what they could do,” said Mrs Price.

Mr Read, 42, who runs his own groundworks business, thought the culprit was Olliver, a bricklayer, who he had worked with about 10 years ago.

He said: “When I was working with him, from the day go, he would call me a n***** lover, write it on things around the workplace and bring in banana skins. It was terrible. I always came home in a bad mood.

“I left the company and I hadn’t seen any of them for a long time and then we get this letter and I thought it was Bryan as it was the sort of thing he would do.”

Mr Read said he did see Olliver occasionally as he would sometimes drive past and shout abuse at him out of his window.

A month after receiving the letter, Joe and Izzy found a large monkey sticker stuck on his car window.

His mother said: “We were out shopping at the time and Joe called me very distressed.

“He sent a picture and you could see their reflections in the car window looking so sad. I started crying in the middle of the shop — I wanted to move home.

“My kids were going to Henley to feed the ducks and do something nice and they had to deal with that just because of the colour of my skin.

“I was getting paranoid at this time, which is not like me, I’m very laid back.

“Izzy really changed as a person. She was staying at home, sleeping in my bed with me and crying all the time. We had to take her to school.

“I had to speak to her teacher to tell her what was going on and Izzy told her that she couldn’t take the racism. She said, ‘Why does it matter if my mum is a different colour?’”

In December, Mrs Price’s father fell ill and she had to go and care for him in Croydon every evening and return to Woodcote in the morning for work.

“I was having to stay strong for everybody,” she said. “Then the card came and I was thinking, ‘Could this get any worse?’”

The card arrived on Christmas Eve and was opened by Mr Read. The court heard that it made Izzy scared for her life and the couple called the police.

Police found that the card had been bought online from Red Frog Designs, which confirmed that the payment details and delivery order came from Olliver.

Mrs Price said: “All the weight was lifted off our shoulders — we knew finally who was doing it.”

Olliver denied that he was responsible and claimed that a friend of his teenage son, who was staying with him at the time, could have accessed his laptop. He told the court that the boy had been underpaid by Mr Read for a day’s work and was “not happy” about it.

Olliver was interviewed by police on January 25, 2020 and told to stay away from the family.

However, Mrs Price said the family couldn’t relax as they were “just waiting for the next thing to happen” and she and Mr Read argued.

She said: “I just wanted to move home — I was adamant. We split up for three days as I was so sick and tired of it.”

Mr Read added: “It was pretty bad and I was sleeping on the sofa for a long time.”

On April 26, Mr Read was cycling in Greenmore, Woodcote, at about 11am when Olliver drove past him and spat.

The spit landed on his right
forearm and tracksuit bottoms. Mr Read said: “I was really p***ed off. He could have knocked me off my bike. I was on the phone to the police within the hour.”

In court, Olliver denied this, saying: “It’s absolutely nonsense. It’s him all over — I didn’t do it.”

Kate Macnab, defending, suggested to Mr Read that he had made up the incident out of “frustration” at Olliver not being prosecuted for sending the card.

On May 15, Mr Read’s mother Angela was walking her dog along Whitehouse Road when Olliver drove past and spat out the window at her. The spit landed on the road.

Mrs Read told the court that she “waved her phone at him” and shouted.

She said she recognised Olliver from when he was a pupil at Langtree School in Woodcote, where she worked as a dinner lady.

Nicola Jones, a friend of who was talking to her on the phone at the time, corroborated the incident, telling the court that Mrs Read had been “flustered” and told her “that b****y Bryan Olliver just spat at me”.

Mrs Read said she had been worried about the spit as it was during the coronavirus pandemic.

Olliver was arrested and charged that evening.

In court, he admitted he had been in the area at that time but denied spitting at Mrs Read.

He said: “I think she drinks too much. It’s black and white, she’s trying to help her man — she wasn’t there.”

Fiona Clark, the lead magistrate, said Olliver’s evidence wasn’t as credible as that of Mr Read and Mrs Price whom she called “good character witnesses”.

Mrs Price said she felt “elated” after the trial.

She said: “Our friends and family are delighted we got the rightful verdict and they said well done for seeing this through and holding him accountable.

“We really felt hated and alienated. He did it out of sheer hate.”

Mr Read said: “We’d like to see him sentenced for a hate crime rather than assault and malicious communication — he deserves it.”

The magistrates ordered a pre-sentence report on Olliver, who remains on unconditional bail.