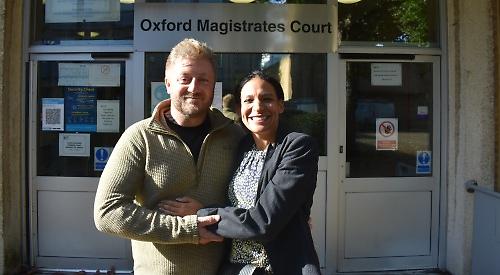 A MAN who sent a racist Christmas card has been given a restraining order.

Bryan Olliver, 48, of Bensgrove Close, Woodcote, sent the card with a picture of a smiling monkey to the home of Michael Read and Heidi Price, who is half Jamaican, on Christmas Eve 2019.

He was convicted of malicious communication after a trial at Oxford Magistrates’ Court last month.

On Wednesday, Olliver was given an 18-month community order and the restraining order, to expire on April 20, 2023.

Speaking after the case, Mrs Price said: “We got what we wanted when he was found guilty as we were proved honest and truthful. I didn’t know what I wanted today, so the court’s decision on his punishment is fine. He has a child and, as a mother, I wouldn’t have wanted him to go to prison. We’re not full of hate like he is.

“Since the verdict I’ve had people in the community contacting me to thank me for standing up to racism. We’re very proud of that.”

The couple were subject to a string of racist abuse beginning in 2019. Banana skins were thrown on the couple’s driveway and in October 2019 they received a racist letter made from newspaper clippings.

In a victim impact statement, Mr Read said the incidents made the couple feel “sick, shocked, defeated and emotionally exhausted”.

Speaking of Christmas 2019, he said: “We had already decided to spend Christmas away from home because it felt violated from the previous incidents.

“I wanted the family to escape because I was fearful something would happen to one of us.

“I was unnerved, stressed and constantly looking over my shoulder. The impact on the children was devastating.

“I haven’t been able to cope and have been prescribed anti-depressants. I felt unable to protect my family.”

Olliver was ordered to attend 32 rehabilitation activity days and complete 120 hours of unpaid work in the community as well as pay costs of £775. The restraining order means Olliver must not contact any of the victims and must avoid Croft Way in Woodcote, where the couple live.

He was told that if he sees Mr Read or Mrs Price in Woodcote, he must cross the street and avoid any direct or indirect contact.

India Ferris, for Olliver, said he had shown a level of remorse, that he was of good character and the sole carer of his vulnerable 17-year-old son, so should not be jailed.

She said he was experienced in training apprentice bricklayers, and that he was keen to do this as his community service.

In a character reference, his employer Brian Procter, who runs building company Butler and Procter in Goring Heath, said Olliver had been a close friend for 29 years.

He said he was “larger than life with a heart of gold and will always go the extra mile to help in any situation”.