Man who killed mother cleared of murder due to his insanity 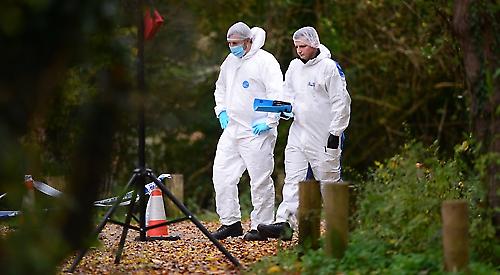 A MAN who killed his mother because he was convinced she was a “demon” has been found not guilty of murder by reason of insanity.

Daniel O’Hara-Wright, 24, was walking with his mother Carole, 62, in woodland at Watlington Hill on October 23 last year when he turned on her.

Oxford Crown Court heard how he used a broken glass bottle, sticks and his feet in the attack before removing his mother’s eyes.

O’Hara-Wright has paranoid schizophrenia and the jury was directed to find him either not guilty by reason of insanity or guilty of manslaughter by diminished responsibility.

It took jurors two-and-a-half hours to reach a unanimous verdict on Friday.

O’Hara-Wright, from Hillingdon, was not in the dock to hear the verdict as he is an inpatient at Broadmoor secure psychiatric hospital.

A court hearing on Tuesday will decide whether he should remain there.

The court heard how he and his mother had been walking at the National Trust beauty spot when he attacked her ferociously.

He then fled across the countryside. He drank from a pond, then threw himself in front of a car and told the terrified driver he had fallen “from the sky” .

He bit the head off a chicken and climbed an electricity pylon, electrocuting himself so badly his arm had to be amputated.

Finally, he broke into a house and slashed at himself in a shower.

He said: “He suddenly saw his mother turning into a demon. He thought he was being lured to a place where he would be attacked by the demon and he decided to kill [her].”

The psychiatrist said he was certain O’Hara-Wright believed he was “damaging a demon”.

He added: “He beat her savagely. He took her eyes out so the demon couldn’t see him and to prove to the demon he was a god.”

A pathologist described Mrs Wright’s fatal injuries as “bizarre”. The cause of death was traumatic acute upper area obstruction, with blunt force injuries to the head, neck and chest and external neck compression.

The jury heard from the woman who was driving near the scene when O’Hara-Wright jumped into the road and got in her car.

Louise Townsend said: “Next thing I knew this man was on the car bonnet and he was looking at me and I knew something was not quite right. He sat in the passenger seat and said, ‘I fell from the sky... do you believe in God?’ I was too frightened to reply.”

She drove O’Hara-Wright for a short distance but he fled after they fought over her handbag and another vehicle stopped.

He was later arrested by police after he broke into a house.

The jury was also told that he assaulted an officer by spitting at him and, on another occasion, attacked a nurse with a spoon.

Earlier, the court heard how O’Hara-Wright would go on long rambles with his mother, who had taken early retirement.

The day before her death they travelled to Virginia Water, Surrey, and posed together for selfies.

Summing up, O’Hara-Wright’s barrister, Mark Graffius QC, told the jury: “This photograph was taken, as you know, just the day before the 23rd and it encapsulates, you may think, what everyone knew — that Daniel truly loved his mother.

“And that evidence is a critical starting point for you in your deliberations.

“As his father told the police, Daniel and Carole got on very, very well.”

He described O’Hara-Wright’s psychotic episode as an eruption of a volcano.

He believed with absolute conviction that the person he was attacking was not human at all.

For years, his behaviour had become increasingly erratic. He converted to a strict form of veganism and grew interested in gnosticism, the belief that humans contain part of God.

Psychiatrists instructed by both the prosecution and the defence agreed that these were the early symptoms of paranoid schizophrenia, the disease with which he was diagnosed after killing his mother.