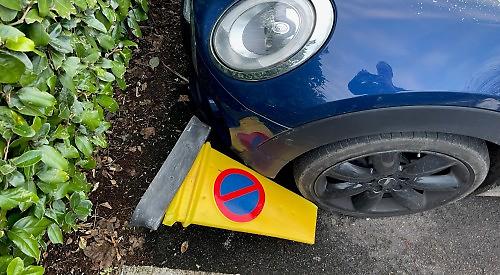 A COUPLE have criticised police for failing to investigate a vandal attack on their car.

The windscreen of Caroline Waller’s Mini Cooper was smashed and the bonnet, roof and front wings were dented in the attack, which happened in the Mill Meadows car park in Henley during Thursday night last week.

Mrs Waller’s insurance company has said the £15,000 car will probably be written off.

Mrs Waller, 57, who lives in Meadow Road with her husband Simon, 59, has a £400 permit to park her car there as the couple have only one space outside their home.

Mr Waller said: “We came out on Friday morning to walk the dogs as usual and found the car smashed up. The heavy cones had been left on the bonnet.

“We called the police and told them the car was seriously damaged and got a crime reference number.”

However, police closed the investigation on Saturday, citing a lack of evidence. They told the couple: “Unfortunately, with the information that has been provided, I have not been able to find enough evidence to carry out further enquiries to bring a potential suspect to justice. Please accept my apologies for this. As a result, our investigation is now closed.”

Mr Waller said: “We’re both less than impressed with the police response. They didn’t come out and see us. I think they think it’s minor vandalism and not worth bothering with.

“This used to be called criminal damage but police have closed the case despite the car park CCTV apparently capturing the attack in full — we’ve established with South Oxfordshire District Council that the CCTV was on.

“My wife’s very proud of her car and it’s very depressing that this has happened. This has ruined our plans for Christmas as we were supposed to be using that car to go and see relatives and we can’t get a replacement car right away.

“No doubt the perpetrators are very pleased with themselves.”

Mr Waller said there was a problem with antisocial behaviour in Mill Meadows.

“There’s screaming kids in the early hours of the morning, especially around the bandstand, and kids using the playgrounds late at night,” he said. “There’s chewed-up cars racing up and down on the road to the museum.

“The police do go out and patrol maybe once a night but it’s getting worse. I think the blame lies with the individuals concerned, not the police, but something needs to be done.”

A Thames Valley Police spokeswoman said: “If someone is not satisfied with the service they have received, they can report it through our formal complaints process.”