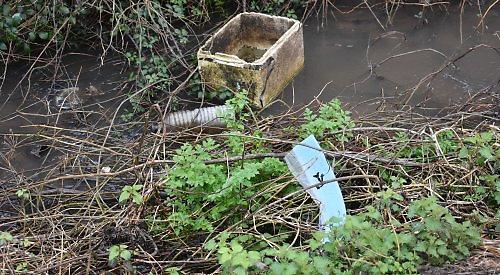 VANDALS have damaged a sign at East Park Farm and fencing at St Patrick’s Park in Charvil.

The sign, which lists the rules of the park, was ripped off of its post and thrown into the stream.

The newly installed fencing at the park was kicked over.

Parish councillor Pat Sutlieff said: “It is possibly kids doing it — this sort of things tends to happen in the last week of half term.

“They weree probably bored. They have nothing to do around here and can’t entertain themselves.

“However, I have no evidence of this, so it is just an assumption.

“There are no cameras or anything at the moment and finding suppliers for cameras is difficult.

“The damaged sign might be salvageable but it is a bit bent. It might be costly to repair, so we are hoping it can be easily fixed.  It can be pretty expensive to replace signs.” Cllr Sutlieff said that the post box in Chiltern Drive had been pulled from its post twice and the Post Office would not replace it.

“In the past bus stops have been pulled out of the ground too,” he said. “They pull the whole lot out and they did that just past Chiltern Drive. They must be quite strong to be pulling things out of concrete.

“That has been replaced now but it took 18 months for the repairs to be completed.”