Who would want to daub bridge? 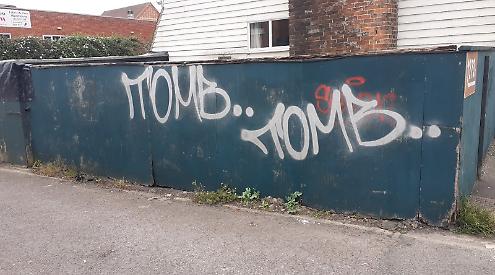 THE hunt is on for a vandal who daubed graffiti on Henley Bridge.

Town councillors says the culprit should be identified and prosecuted.

It comes after a large letter “H” was spray-painted in black and white on the side of the Grade I listed structure during Saturday night.

The “tag” is on the Wokingham side of the bridge, close to the Henley Royal Regatta headquarters, and can be clearly seen from Singer’s Park and Thames Side.

This is the latest in a series of incidents in which vandals have spray-painted street furniture such as telephone boxes, bus shelters and the railway bridge in Mill Lane.

Councillors are worried that the latest attack will enourage copycats and the problem will get worse.

Police have been visiting schools and The Henley College to try to trace those responsible.

Mayor Sarah Miller said: “I just can’t believe it — I can’t get my head around why someone would graffiti the bridge. How low can people go?

“I just don’t understand the mentality of these people who think it is cool to do that to the bridge or any property that isn’t theirs.

“We are coming up to the regatta and the festivals but even if we didn’t have those, the graffiti is making the town look awful.

“It worries me that there is going to be more graffiti and having it on the bridge just opens the floodgates for these imbeciles to get their crayons out and leave their names or calling cards on such iconic buildings as the bridge. How bloody dare they?

“I don’t want to see any more of this and we need to sort it out. I just want this to stop.

“Maybe we should put a reward out to try to find the culprit.”

As the bridge is owned by Oxfordshire County Council, it is responsible for removing the graffiti. Stefan Gawrysiak, who represents Henley on the council, said he had asked officers to tackle this as soon as possible.

He said: “I am absolutely shocked that someone would graffiti a Grade I listed structure with complete and utter contempt.

“I researched whether we can prosecute and according to what I read online, if they do less than £5,000 worth of damage the police won’t prosecute, which is ridiculous.

“So the message can go out to graffiti artists that they aren’t going to be prosecuted, which is absolutely shocking. We want this graffiti to be removed and it will be the taxpayers who have to foot the bill.

“I am really angry and upset that this spate of graffiti is happening. We have to catch the culprits because otherwise there could be a spate of copycat graffiti and we have already seen this around the town with two or three different tags.

“It baffles me that people think it is art to damage a bus shelter or a BT phone box. Express your art somewhere else.”

Cllr Gawrysiak added: “Somebody out there must know who is doing it and should go to the police and give them a name so we can prosecute them as soon as possible.”

John Halsall. leader of Wokingham Borough Council, said he was “appalled” by the attack on the bridge.

He said the “H” tag had been linked to a well-known artist but this had yet to be substantiated.

He said: “The Facebook traffic seems to suggest that the perpetrator is known but I have no evidence for that. We will do what we can to help Oxfordshire County Council.”

Daniel Grist, secretary and chief executive of Henley Royal Regatta, said: “It is a great shame that someone has chosen to deface a listed structure that has been there for more than 230 years. It is of considerable importance from a heritage perspective and to the town.”

Town clerk Sheridan Jacklin-Edward said: “It is very disappointing to see graffiti like this. Although this graffiti falls under the remit of the county council, we know from our efforts in the town that the damage can be long-lasting.

“Graffiti removal can cause unsightly abrasion to surfaces. This is of particular concern as the stone on the bridge is light and porous and it is, after all, Grade I listed.

“Incidents like these are all the more noticeable because people generally take great pride in keeping Henley beautiful, including participating in litter picks and by supporting Henley in Bloom.”

Last month, town councillor David Eggleton, who chairs Henley in Bloom, suggested installing a “graffiti board” to give people a safe and legal way to express themselves.

He said: “If you speak to the people in Woodley, they had just as much graffiti and they thought about how they could deal with it. They set up a specific board so people went and tagged that board. Since then the graffiti has died down quite a bit. I don’t condone tagging but if that works and stops tagging on other things I don’t think there is a problem in trying something.”

A spokesman for Oxfordshire County Council said: “The council has been made aware of this act of antisocial and criminal behaviour and will seek to remove the graffiti as soon as possible.

“Unfortunately, the porous nature of the limestone construction of this Grade I listed structure may mean that the damage cannot be easily reversed.

“The council would encourage anybody with information about those responsible for causing the damage to report it to Thames Valley Police.”