Who sank my boat? 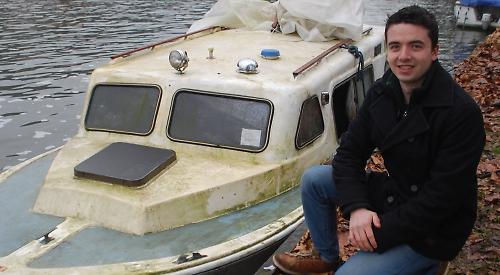 A MAN has spoken of his relief at his boat being raised from the River Thames in Henley after being submerged for 10 days.

He has owned the boat for four years and had been refurbishing it while it was moored at a section of towpath at Marsh Meadows.

He discovered it had been sunk on the evening of Tuesday, November 22 after being alerted by a member of staff at Henley Town Council responding to an online post.

“I was pretty gutted,” said Mr Greenan, who lives in High Street, Nettlebed, and works as a software engineer in Henley.

He found one of the ropes used to secure the cruiser had been cut, so he suspects foul play.

Several days later one of the cabin windows was smashed using a large rock.

He reported both incidents to the police but was told that because there were no witnesses or any CCTV evidence there was little they could do. On Friday, three men from River Canal Rescue, of Stafford, raised the boat from the water using winches, straps and ropes and then pumped out the water inside to right it.

The operation took about 90 minutes and a section of the towpath was cordoned off while it took place. Speaking immediately afterwards, Mr Greenan said: “I’m very pleased to see it on the surface again. It’s a relief.”

He said the boat looked salvageable, although the wooden units and carpets inside would need replacing.

“I don’t think it will too be difficult to repair,” said Mr Greenan. “It’s not looking as bad as I was expecting. The fibreglass is quite good as you can pressure wash it and it will come back up.

“Hopefully the insurance can help with some of the cost. The minimum charge for the salvage was £600 and it’s only insured up to £2,000.”

The boat was built in 1970 and Mr Greenan had been doing it up.

He said: “When we first got it she didn’t even have floorboards. We fixed the floor and put in carpets. We replaced the wooden handrails and added a new hatch on the front.

“It started off as a project to get it looking nice. We normally go to the regatta and festival and take our friends on it.

“Now we have to start over again. Hopefully I’ll find a dry mooring where they take it out of the water while we look at the repairs.”

Pete Barnett, who co-ordinated the salvage operation, said there were air vents above the engine at the back of the boat where water could have entered, causing it to sink.

He said the engine would need servicing but he was confident it would run again and the interior could be pressure-washed and refurbished.

Mr Barnett said: “It’s a lot of work to strip out a boat and start again but it doesn’t look that bad, it just needs a bit of work on it.”