A NORMANDY veteran from Henley took the French President by surprise at the 70th anniversary commemorations of D-Day.

Zbigniew Mieczkowski, 92, shook hands with François Hollande before quizzing him on his countrys relations with Russia in front of TV cameras from around the world.

He also met the Queen and Duke of Edinburgh, US President Barack Obama and German Chancellor Angela Merkel on Ouistreham beach in Normandy on Friday.

Mr Mieczkowski, who is Polish, was one of 15 veterans chosen specially to greet the heads of state of the 19 countries represented.

The retired major, who served with the Polish Armoured Division during the Allied troop invasion in 1944, said it was an emotional occasion.

Mr Mieczkowski said: It is an important day to the French and they were receiving important people from around the world. It was remembering D-Day and a great victory in an important battle of the Second World War. Of course it was emotional, certainly at my age, reminiscing about all the battles and the people who were there. It plays on your mind.

Mr Mieczkowski couldnt resist asking President Hollande about what it was like hosting a dinner with Russian President Vladimir Putin and another with Mr Obama.

I asked him which dinner he enjoyed more but he wasnt very much for explaining, he said.

Later, he was among the diners at a French chateau together with the heads of state and the royal couple.

In July 1944, Mr Mieczkowski was part of the armoured division that played a crucial role in closing what became known as the Falaise Gap.

After landing in Normandy, he and his fellow Poles helped to contain the German army as part of a pincer movement executed by the Canadians and Americans, forcing the surrender of 50,000 Germans.Mr Mieczkowski recalled: Field Marshal Montgomery, when he visited us later in Holland, told us that the Gap was like a bottle of Germans and we were the cork. For three days we were attacked by 70,000 Germans who were trying to move away from the gap of Falaise while we were only 3,000 men.

We stopped the Germans escaping after being encircled by us, the Americans and Canadian armies. It was a very difficult campaign because we were fighting very good German troops. They were magnificent soldiers.

Mr Mieczkowski joined the Polish army in France in 1939 when he was 17. At the time of the French armistice he was evacuated with his unit to Great Britain and defended Scotland from possible invasion by the Germans from Norway.

After Normandy, he helped liberate the Dutch town of Breda in October 1944 and took the surrender of the German naval base at Wilhelmshaven in May 1945.

By the end of the campaign his division had lost a third of its men. Mr Mieczkowski was demobbed in 1947. He was awarded the Polish Military Cross for bravery as well as the Légion dHonneur and Order of Leopold of France and Belgium respectively.

After the war, he did not return to Poland because of its influence from Russian Communism and settled in England instead. He was married in the Fifties and he and his wife Caroline moved to Henley in the late Sixties. They have two children and two grandchildren.

Mr Mieczkowski has been very active in raising funds for monuments commemorating the achievements of his comrades in the liberated towns as well as London, Warsaw and Edinburgh. He has also written several books.

He has returned to Normandy on a number of occasions, chiefly to visit the war memorial to his division on Mont Ormel, which was built by locals. In August he will return with his family so they can see what I did in the war. 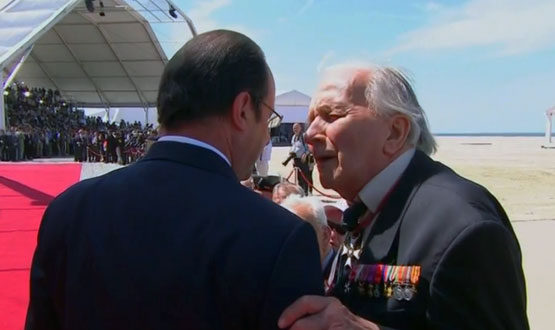