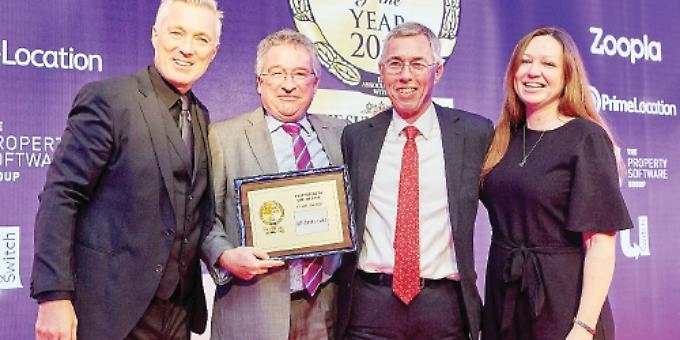 HENLEY estate agency Davis Tate was awarded Gold in the South East category at the Estate Agency of the Year Awards 2016 in association with The Sunday Times and The Times, sponsored by ZPG (Zoopla Property Group).

On Friday, December 2, hundreds of leading estate agents from across the UK attended a glittering ceremony at the Hilton London Metropole Hotel, where the winners of the most highly regarded awards in the estate agency industry were revealed.

The winners were presented with their awards by celebrated film and TV actor and Spandau Ballet bassist Martin Kemp, with renowned journalist, author and newsreader Penny Smith acting as compere.

Award winners were decided following a rigorous and thorough judging process by a panel of industry experts, beginning with an assessment of entry submissions.

The judges then conducted an extensive review of the entrants, including more than 150 hours of telephone interviews and independent mystery shopping exercises.

The judging process was overseen by the property ombudsman Katrine Sporle, and David Mackie, the president of the National Association of Estate Agents, acted as arbiter.

The winners were competing for regional awards by size of business and also in a number of specialist categories from marketing to prestige homes. Individual valuers, negotiators and managers were also recognised for their hard work and commitment to customer service, along with the awards for outstanding contribution to estate agency, the Cecil Jackson Cole Award for corporate social responsibility, and the supplier and conveyancer of the year awards.

Regarded as the Oscars of estate agency, Davis Tate’s gold award came in the “South East Medium” category — where “medium” denotes a business of up to 15 offices.

Davis Tate founder and managing director David Tate said: “We won our first national award in 2004, and have striven to continue. In 2006 we were voted best company to work for and we have won a number of other accolades but this gold award is our first and we are delighted to win it in our 25th year.”

For a list of all the winning companies, together with comments from the judges as to why they won, visit www.estateagencyoftheyear.com — where you can also view the full judges’ report.