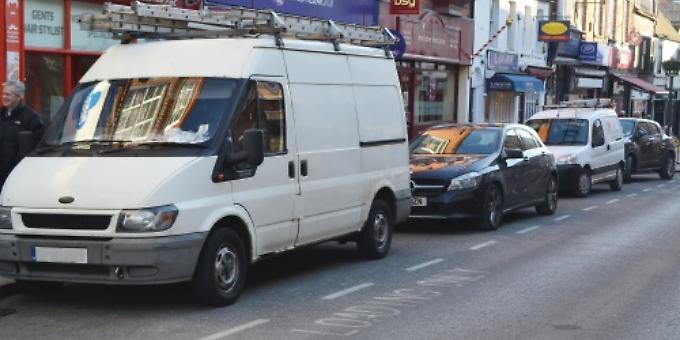 Traders say the problem is affecting their deliveries and have called for enforcement action to be taken.

The Henley Standard has witnessed drivers routinely parking in the bays in Duke Street and Bell Street that are intended for delivery vehicles.

The bays allow for the loading or unloading of goods “in connection with business use” for a maximum of 10 minutes.

But businesses say they are often used by people who park and then go shopping.

Vans and lorries delivering to shops in Duke Street are forced to go round the town’s one-way system until a space comes free or have to pull up on the pavement, putting pedestrians at risk and sometimes blocking traffic.

Police are responsible for enforcement but traders say that while tickets are sometimes issued to cars parked illegally this does not discourage people.

Jane Webber, manager of the Cancer Research UK shop in Duke Street, said: “We have our own van going round dropping stuff off and sometimes it has to go around for 10 to 20 minutes waiting for a space because people are parked in the bays.

“People like to drop off donations here too but they might be giving up and going somewhere else because there are no spaces.

“Drivers park and then wander off for at least an hour. In the past we have had traffic wardens come around but that’s not always the case.

“Last Saturday someone parked here and said, ‘it will be okay if I go shopping, won’t it?’ People don’t realise.”

Shop manager Shiri McAndrew said: “The wardens used to come around quite a bit but not so much now. Because it’s a one-way street it’s such a hassle.

“Our driver sometimes rings from the van and says ‘can you stand in the road?’ because there are no spaces.”

Laurence Morris, who runs Laurence Menswear, said: “I’m fed up with people who use the loading bays as parking spaces and you will hear the same story from most people down here.

“The taxis also use it as a waiting zone. There are occasions when I need to use my car to bring things in and out of the shop and it’s really irritating.

“A lot of times I’ve had delivery drivers say they’ve had problems and had to park around the corner.

“The town is fairly tolerant about this. Cars are ticketed by police in parking bays but the problem is they aren’t around all the time.”

Jean Hugill, manager of the Helen and Douglas House shop, said: “Because people park there, our delivery vans can’t get in.

“We have three vans a week and one morning the driver had to park on the pavement because there were cars blocking all the loading bays. Last Friday he had to go round five times — he kept coming past us. People trying to drop donations off they are also finding it difficult.”

Barbara Easton, who runs the shoe shop of the same name, said many drivers didn’t know they weren’t allowed to park in the loading bays.

She said: “Some people drop off elderly relatives and wait for them. It’s especially bad if it’s raining or cold.

“Wardens are putting tickets on cars if they’re there a long time but some people just think it’s free parking.

“In the past our delivery vans have had to come up on to the pavement, especially if it has been a big delivery of shoes. Either that or they have to park a lot further up the road.”

Last Friday, lorry driver Rafal Niedzwiecki was delivering to the Costa coffee house in Duke Street and had to park at the back of the loading bay on the opposite side of the road and take several heavy crates across the road.

He said: “Sometimes there are spots but at other times we have to go around two or three times, which is frustrating.

“Sometimes I have to cross the road which is annoying when it’s because people have just left their cars and gone shopping.”

Mark Evans, who has an office in Duke Street, said: “All day long I see shoppers use these bays as if they are a short-term parking option for the lazy. They pop into various shops, cafés or the baguette shop.

“Meanwhile, the legitimate vans and lorries trying to deliver to the shops have nowhere to park so have to block the pavements to unload, which is both unsatisfactory and dangerous to all.

“It is a maddening problem and can only be resolved if there is heavy enforcement which there may not be the resource for.

“Most of the time it’s just laziness as people see an opportunity to park outside the shop rather than use a car park. What worries me is that there’s going to be an accident.”

Town councillor Ian Reissmann said: “Loading bays should be used for what they’re designed for — people who are genuinely loading or unloading rather than parking and shopping.

“It’s up to the police to enforce the rules so that the shop owners can load and unload as intended without causing disruption to other road users.

“We should ask the police to increase their patrols of loading bays and move on those who shouldn’t be there.”

Mayor Julian Brookes said: “When the lorries can’t park they go round the block a few times, which is adding to the traffic and pollution in the town.

“We need to persuade people that parking there to do their shopping is not neighbour-friendly.

“We also need to persuade police to enforce the loading bays more as that would be really good for the town and economy.

“Either that or we get civil parking enforcers, which would put the issue in to our own hands.”

“It’s for police community support officers and police to ticket in loading bays.

“We have got charity shops in town which people bring bags of donations down to. We don’t want to be draconian and stop people doing that. They are there for 30 seconds then off again.

“We are trying to stop people who drop their cars off there and go for a coffee or to the bank — that’s not what it’s for.”

The problem was previously highlighted in October 2015 when then Henley Mayor Lorraine Hillier was photographed parked in a loading bay in Bell Street.

She parked her Nissan Rasheen in the bay outside the Sainsbury’s Local, while buying supplies for the Hot Gossip coffee house in Friday Street, which she owns.

Councillor Hillier admitted she had made a mistake but said that she had spent only a few minutes parked in the bay and complained about being subjected to excessive abuse on the internet.