Car dealer being forced out to make way for new homes 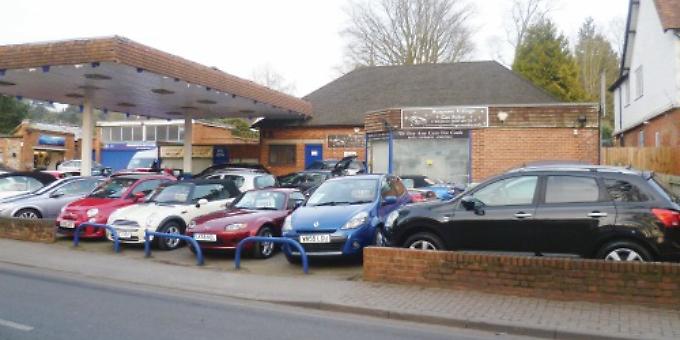 THE owner of a car dealership in Wargrave says he is being kicked out just months after renewing his lease to make way for housing.

Pete Palmer, who runs Wargrave Village Car Sales in High Street, has been given six months’ notice by a developer called Oraclemarker, which bought the land in November.

The company wants to redevelop the site and build six flats and five two-bedroom houses with 18 parking spaces, gardens and a communal area.

This would mean demolishing the dealership, which has been in the village for almost 70 years, as well as a neighbouring MOT centre and a house called Suncroft.

Mr Palmer, 56, from Maidenhead, has run the business for the last three years and only signed a lease for another two-and-a-half years in August when the site still belonged to the previous owner.

He said: “When my lease came to the end the former owner asked if I wanted to stay and I said, ‘of course’.

“He then decided to sell it. The new owners gave me my notice in December, so I’ve now got four months to go.

“There are two different businesses here and I employ five people who are all going to be out of work. Is that good for the village? Is that what the Government wants?

“This has been here since 1950 and there has always been a car dealership and MOT station here.”

Speaking at a meeting of Wargrave Parish Council on Monday, Mr Palmer said: “I think it’s tragic that Wargrave should lose this commercial property. There are enough places to build houses so they should leave this site for Wargrave to enjoy.”

He said he had worked with other businesses in High Street and was worried that losing more could kill retail in the village.

Last month, the Henley Standard reported that the owner of the Old Post Office café wants to close the business and turn it into a house.

Mr Palmer said: “When I first came here the café wasn’t open and there weren’t many shops but then the place came to life. Businesses started to open and it made Wargrave look alive.

“I have people come here from around the country and I tell them to pop up the road for breakfast at the café. We all help each other.

“If they take the café, us and the MOT centre out of here what will be left in Wargrave high street?”

Mr Palmer said that if Wokingham Borough Council refused permission for change of use then his business could stay.

In the meantime, he was looking for new premises further away.

Mr Palmer said: “There is nothing in Wargrave so I’m having to look in Surrey.

“I’m trying to relocate but I’m finding all garages seem to be being built on. If there’s a big bit of land somewhere housing is being put on it.”

In a planning statement, Oraclemarker says: “The existing commercial buildings and former petrol station canopy are of poor quality appearance and are not considered to make a positive contribution to the character or appearance of the conservation area.

“These buildings would be replaced by a high quality, sensitively designed development, comprising 11 new residential properties.

“The proposed development has been specifically designed to respond to the constraints of the site and to reflect and respect the character and appearance of the surrounding area.

“The result is a form of development that will successfully assimilate into its surroundings.”

At Monday’s meeting, the trustees of the Woodclyffe Almshouses, which are behind the site, said they were opposed to the plans as drivers would have to use the “fragile” access road.

They said visitors and delivery vans might use the almshouses’ parking spaces or else park in Wargrave Hill, which was already overcrowded.

William Monte, who owns a neighbouring property in Wargrave Hill, added: “We have problems with parking but our main problem is the overdevelopment of this site. It’s an attractive use but it’s clearly overdevelopment.”

But Oraclemarker’s plan have been backed by other residents.

Helen and Brian Scholfield, of High Street, said it would be “great” to see some “less expensives” homes, while Derick Brown, of Wargrave Hill, said the development would enhance the area.

Richard Beasley, of High Street, and Neil Vickers, of Wargrave Hill, both said they supported the application but were concerned about parking on the site.

Mr Beasley said: “The high street already has negligible parking and Wargrave Hill has become an overflow. The hill is often dangerously blocked and has no footpath.”

Councillors said they were concerned over the size and scale of the development as well as the loss of a long-standing business.

Councillor Terry Cattermole said: “The initial issue is losing an amenity for the village. The second is the degree of building within the conservation area and the third is parking.”

He added that Oraclemarker had made no provision for affordable housing, which was desperately needed.

Councillor Michael Etwell said: “I’m not really in favour of losing an active business in the village.”

Councillor Philip Davies said: “We have a lack of parking in the village and I believe this will exacerbate the problem.”

Councillor Angela Cordell said: “It’s far too overdeveloped and could have at least 20 cars there when it’s dangerous as it is.”

The council agreed to recommend the plans are refused on the grounds of overdevelopment, highway safety and loss of a commercial amenity.