'Old meets new' extension will more than pay for itself 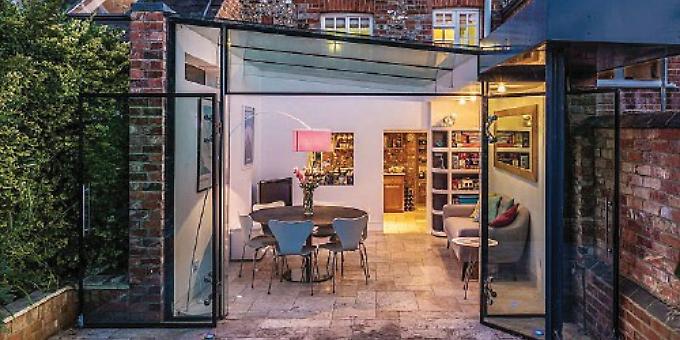 SOME say the area of Church Street and Greys Hill is the best location in Henley — a kind of “village within the town”, if you will.

Central but squirrelled away, this is a hidden oasis where neighbours are friends, traffic is light and footfall is high.

As estate agent Philip Booth says: “Church Street has long been called the most sought after residential roads in Henley town centre.

“It’s so pretty, quiet and friendly, and is full of families. Plus it’s only a five-minute walk to the train station, River Thames and shops.”

Church Street is also in the catchment for Trinity C of E Primary School — rated outstanding by Ofsted — which uses neighbouring Trinity Church for many of its school activities.

Sounds perfect, no? The downside is the houses here are small, the majority being Victorian terraced cottages.

The solution? Make do and improve — whether it be up, down or out. In fact, with stamp duty levels as they stand, you may even be better off financially if you extend rather than move house.

In the case of number 17 Church Street, the previous owners chose a basement extension to solve their dilemma.

But we’re not talking a cheapskate PVC conservatory where wicker furniture goes to die. Identikit flat-pack conservatories with bi-folding doors are okay, but go one step further and you’ll be creating something architecturally special that will last the test of time.

As the Society for the Protection of Ancient Buildings (SPAB) advises: “Go modern and go bold — a clear break between old and new.”

London architect Tom Croft, who has worked on numerous projects of this type, says: “While SPAB is all for the protection of historic buildings, it also encourages modern extensions and states that old things should look old and modern things should look modern.”

Because number 17 is grade II-listed, the architect, Winchester-based Focus Design, had to be especially careful to respect the original structure of the building while incorporating a “wow factor” single-storey glass extension.

“We wanted to live in Church Street, but it was the extension that clinched in for us,” says current owner Kate Potter, who has lived at the house with husband Tom since 2007.

“We were already in Henley and knew we wanted to live close to the town centre, and were so lucky when this property came up.

“Church Street is a wonderful place to live. It’s got a rural community feel to it, with friendly neighbours and also a lot of history.”

In the past, number 17 has been home to a horse bridle maker and one of Henley’s railway station masters, as well as a baker’s runner for the old bakery around the corner (now a house).

When the Potters moved in, Kate added to the history by choosing to have three home births.

“The extension really is a special room for us,” adds Kate. “It has a great feel, is multi-functional and all three of our children were born in this room. It stays a comfortable temperature all year round and it’s also so private. We’ve had no need for blinds.”

The extension is supported by a structure of low-iron “white glass” which does not give off the green tinge of thick glass — in turn making it less prominent.

“When we moved into the house, we were told by the previous owners that up to six people could stand on that roof,” adds Kate. “We’ve both been up there to clean, but further than that, we haven’t been tempted to test that theory!”

This is high-performance glass — semi-reflective to keep things cool in summer thanks to a coating of solar-controlling titanium dioxide. The fact that the garden faces east also helps keep midday dazzle to a minimum.

Conversely, in winter, the inner panes have a coating that absorbs heat energy, as well as an argon-filled cavity that helps keep heat from the underfloor heating in the structure when it turns cold.

“This is definitely the room where we spend most of our time, even in winter,” adds Kate. “It’s a comfortable space for relaxing, working, playing and so forth, not just for mealtimes.

“But because the kitchen is positioned at the back of the extension, inside the original building, it’s also much easier to organise the children at mealtimes, as well as socialise with guests while cooking.”

It also means that, even in winter, dinner parties can be enjoyed with a garden view. “To check the weather, you only have to look up!” says Kate.

In summer, glass doors open wide across stone flooring, which continues seamlessly on into the garden, like a kind of “infinity patio”.

This gives the illusion that the room is bigger. “In summer, the garden essentially becomes part of the room — we gain a whole other floor,” says Kate.

In the tradition of a Victorian terrace, Church Street gardens are narrow, but they are also incredibly long per ratio. Square metre-wise, houses of this type come with larger outside plots than equivalent new-builds.

Kate and Tom currently have a pretty summer house at the bottom of their garden, but the next owners could easily invest in a bespoke office/guest pod to create further valuable indoor space.

Adjacent to the summer house is a gate to Henley’s often-unknown Southfields long-stay car park off Greys Road. A council parking permit is available to park here for £543 per annum, or half that for a low-emission car.

The rest of the house has been treated with heavy doses of respect, being restored and well maintained over the years, and decorated in “Little Greene” English Heritage colours.

While the lower floors contain three reception rooms, a kitchen, utility and bathroom, the upper floors offer three bedrooms and another bathroom. These have great views of the town, especially the top (guest) bedroom — a tasteful attic conversion with storage space in the eaves.

Talking of which, those feeling inspired by number 17 Church Street, will find the words of a London-based Knight Frank expert music to their ears.

“I’ve seen lots of people create these spaces by extending on to the side or the rear. Floor area is in high demand in sought-after low-stock areas [such as Henley], and with a successful side or back extension, when you come to sell, you can sometimes get back double the amount the extension cost you.”

Another agent based in London even dares put a figure on it. He values a house with a converted loft, converted basement and a side return extension (still leaving a 50ft garden) at £200,000 more than a similar, but unextended house on the same street in Fulham.

In Henley, Phil Booth says: “This house offers something high-end and special, and although it’s hard to quantify, people always do well out of something special like this. Number 17 is certainly more saleable, more desirable, because of its practical but beautiful piece de resistance.”

l Bathrooms: two (one on the lower ground floor)

l Other: garden, utility room, grade II-listed, 0.25 miles from the town’s Market Square, and a five-minute walk from the train station (London Paddington/Reading); Ofsted ‘outstanding’ state school catchment, as well as being close to other excellent local schools, including Sacred Heart (state) and St Mary’s (private)