Chocolate box cottage? Thatch the way to do it 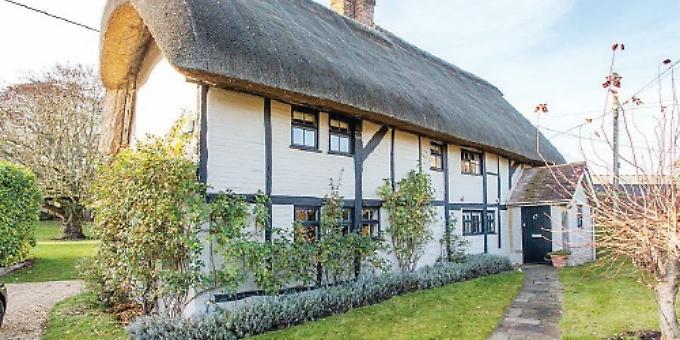 AS well as being chocolate-box pretty, traditional thatched cottages are known for being, well, how can we put it? Rather on the snug side.

So despite their infinite charm and desirability, it’s unlikely you’d go looking for one as your future family home.

Not unless you’re builders and interiors specialists who thrive off the unknown, with a vision to add much-needed space.

“When it comes to thatch, it’s a bit like Marmite — people either love it or hate it,” says Bronwen Pearmund, of herself and builder husband Andrew, both in their fifties, who are most definitely in the former camp.

“We both specialise in doing up listed buildings, so when we came across the Grade II-listed property in 2003, we thought ‘What have we got to lose?’ ”

So began the task of turning the building into a workable family home for themselves and their two children.

“It was in very bad repair and had been left to moulder for about 30 years when we came across it,” recalls Bronwen.

“We had to find a way to combine the listed character features with 21st century comforts. Having come from a more modern property, we didn’t want to compromise on things like light, space and practicality. So we came up with the idea of adding a glass and brick extension that would blend with the main house.”

First things first, though — the Pearmunds changed the name. “It was called The Thatch — and I hated it!” says Bronwen.

“We chose ‘Slade’ after the name of a local landowner and ‘Farmhouse’ because it looked like it had been — we found lots of pen-style posts downstairs where they would have kept animals.”

In fact, the building was originally two houses. “Once, an old lady knocked on the door and asked to take a look,” says Bronwen. “She said she had used to live in one of them — four people squashed into the end.”

Other former inhabitants included a blacksmith and a fallen First World War soldier, as well as tenants who worked at a local stud.

For the reborn thatched property, work first began with the garage in 2004-2005 (more on which later). “It was a horrid old tractor shed with galvanised metal doors and didn’t fit with the rest of the property,” says Bronwen.

Later, in 2006, the Pearmunds turned their attention to the oldest part of the house after being granted certain listed building consents.

“Sometimes on a listed project you’re a bit nervous about doing something like this,” says Bronwen. “When we were in the thick of the renovations, I sometimes did wonder, ‘Why have we taken this on?’ — but it’s been worth it.

“You get better and better every time you do it, and we work well as a husband-and-wife team.”

This was the first time the Pearmunds had encountered thatch, but it didn’t put them off.

Bronwen says: “It is a better insulator than most roofs. The main difference for us, living under one, is that it is so quiet. You hardly ever hear when it rains.”

More economical and as long-lasting as most ordinary roofs, thatch is not only carbon-neutral but has age-old tried and tested properties that help a house stay warm in winter and cool in summer.

Much like regular tiles, a newly thatched roof should last between 15 and 40 years, depending on quality. Slade Farmhouse was rethatched in 2012.

Inside the Grade II-listed structure, the first thing to happen was moving the staircase so a bathroom could be created upstairs. Next, Bronwen and Andrew got to grips with the general renovations.

“Someone had added a false ceiling with mock beams,” reveals Bronwen. “It was crazy!”

Where there was previously just one reception room — the other two rooms were a kitchen and a bathroom — now there are three. The biggest surprise here, was the discovery of two pristine inglenook fireplaces.

Bronwen says: “When we cleaned the old paint off the beams they were in much better condition than we thought, so we just scrubbed and polished them up — that was a nice surprise in itself. But finding the inglenooks was wonderful. We had no idea they were there. One has beautiful herringbone brickwork which looks 15th century.”

Directly upstairs, under the thatched roof, is the master bedroom, complete with dressing area and en suite bathroom. There are also two further double bedrooms and a decent-sized family bathroom on this floor.

“For a traditional thatched house, there is a lot more ceiling height than you’d imagine up here,” says Bronwen of the feeling of light and space. “The fact that this was already in place definitely influenced us to buy the house in the first place. Rooms never feel oppressive and claustrophobic.“

The final stage of the build was the extension, which would house a kitchen with guest suite over the top.

Work began after planning permission was finally approved in 2011. Bronwen says: “It wasn’t an easy journey. We kept being turned down for the kitchen but we fought it by taking it to appeal. Eventually we won. Now this kind of build seems to be more acceptable, but back then nobody was really doing this kind of extension.”

Once finished, it changed everything for the family. “The extension completely transformed the living experience for us all,” adds Bronwen.

With its painted timber cladding under a traditional tiled roof, the extension was designed to look like both sections belonged together.

“We did have an architect but it’s pretty much as we envisioned it,” says Bronwen. “We knew what we wanted and they just drew it.”

The kitchen has French doors which open out on to the south-facing garden of 0.55 acres — not too big to be hard to maintain, yet plenty big enough for children to play.

“The garden is mainly made up of lawn and it’s lovely and private,” says Bronwen. “With the spring weather as it’s been, I’ve already had the French doors open on to the terrace.”

Bronwen says the terrace gets sun right from the start of the day through until the sun sets.

Slade Farmhouse now consists of three parts — the main house with its original features; the two-storey glass and brick extension; and the aforementioned separate annexe/garage.

To match with the rest of the property, this was also constructed with a heavy oak frame, under handmade tiles. Up top, it offers another bedroom and bathroom, while directly underneath are three car parking bays.

“The accommodation over the garage is extremely useful,” says Bronwen. “I now use it as an office, but we’ve also used it as a guest suite, and my oldest daughter once ‘moved in’ there before she left for college.”

Of Slade Farmhouse’s location, Bronwen says: “This is one of the things that makes the house so special.”

Situated on the edge of the village of Aston Upthorpe, it’s quiet but not remote, with excellent views of open parkland. There is a strong local community, a village pub and easy access to transport links.

“There are a load of clubs and societies and it’s easy to get involved,” says Bronwen.

Three miles south of Wallingford, Aston Upthorpe and its neighbouring village Aston Tirrold — together known as the Astons — also share a petrol station, a few churches and a village hall.

The nearest train station for London and Reading is at Cholsey which is approximately 10 minutes by car, but Bronwen says Didcot is a far better choice with direct trains to London Paddington in 45 minutes.

The house is also in the catchment area for South Morton Primary School, as well as many well-renowned private schools, such as Cranford House.

Bronwen adds: “Works on the main house and extension transformed the property into the house of our dreams when we were a young family, but now we’re planning to downsize. Plus Andrew says he wants somewhere with not so much grass to mow!”

Vanessa Townsend, country homes specialist at Davis Tate, which is the sole agency for the property, adds: “Slade Farmhouse is a proper thatched country farmhouse with absolutely no work to do inside. There is so much light and space and so much character — it makes for a winning combination.”