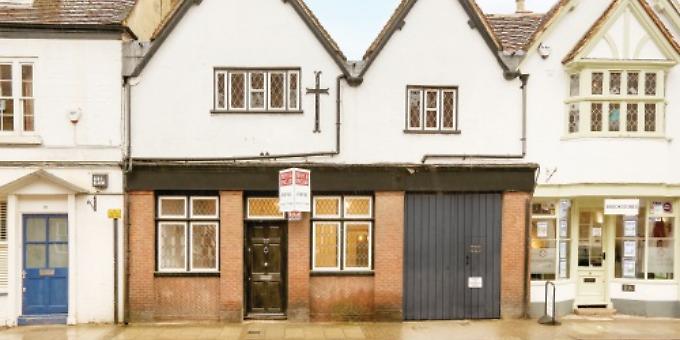 Another pub conversion in
Henley? Can you ‘bear’ it? Yes, most definitely, says LUCY BOON, who was surprised to learn what was uncovered behind the walls of number 77 Bell Street

“WHEN I started renovating the front room, I discovered not just one, but two false ceilings,” says local lad Simon Connolly.

In one sentence, the property developer captures the kind of challenge he’s faced to turn part of one of our town’s oldest properties — one which has had many different faces — into a 2017 apartment.

Number 77’s most recent guise was as hairdressers Henley Hair & Beauty, but step back into the past and you’ll discover that this apartment formed the front section of a 15th century former hostelry that was known for its bear baiting — hence the name The Bear.

“They used to have a pit out here at the back of the inn,” says Simon of the rear courtyard (now part of an adjacent property). Simon bought the ground floor apartment two years ago, with a view to “returning it to its former glory — warts and all.”

The exposed solid oak beams, in a typical medieval framed structure, pervade both inside and out and are thought to be from the 1400s (the adjacent section of the building has been dated to 1438).

Ruth Gibson from local club the Henley Archaeological and Historical Group (HAHG) says of the former inn: “The medieval ‘Bear’ is the earliest surviving courtyard inn at the northern entrance to the town.

“Its four tall gables dominate the street frontage and would invite travellers to stay in its comfortable chambers, while the wide gateway would lead to the courtyard and long rear ‘lodging ranges’. These front street-side gables were built over a period of time, and had joint ownership, evidenced by separate wall frames and varying levels. Past owners include the 17th century landlord John Dolton, and 18th century landlord William Brooks.”

Agency Penny & Sinclair, which is the agency for the property, describes it as “sympathetically restored and beautifully presented”, but this doesn’t even scratch the surface of the amount of hoops Simon as the developer has had to jump through to make this property work. There was red tape galore to navigate to get this Grade II-listed building up to standard.

He explains: “I’ve worked in property development for years, but this was the hardest conversion I’ve had to deal with.”

Simon found himself going back and forth between Building Control and Listed Building Control until all parties were happy — and let’s not forget the involvement of multiple heat engineers, sound engineers, safety engineers and so on. Even the walls had to be given an extra 50ml of eco-friendly breathable infill to satisfy the authorities.

“It’s now the most soundproof, temperature-consistent, fire-retardant property I know!” says Simon, who says he keeps a whole file just for the legal certificates.

Simon also discovered two perfectly good fireplaces while working on the project. The oldest is now the focal point of the living room, which has high ceilings along with those ancient exposed beams, lead light windows, and beautiful oak floors.

“There were several layers covering the fireplaces,” says Simon. “You couldn’t even tell they were there. That was a big surprise.”

Simon also lovingly renovated the front face of the building, which again looks to have been reworked in the Thirties.

As Ruth says: “A lot of the buildings in our town have medieval foundations but remodelled fronts — a kind of ‘Keeping up with the Joneses’ idea. Like the former Bear, there are several other buildings of quality and size nearby, dating to the first half of the 15th century, which is a particularly interesting period for the town.”

Existing leaded glass windows were also renovated and copied for other windows where needed. These bring in more light to this south-west facing apartment.

Adjacent to the open-plan living room and kitchen is the second bedroom (to one side). The kitchen has Shaker-style cabinets, AEG appliances and a solid oak worktop and breakfast bar, which is low enough to be used as a proper dining table.

“The design of this open-plan living/kitchen area had to be well planned,” adds Simon. “The reworking of various floor levels between the living room, kitchen and bathroom/bedroom accommodation made this possible. I think this now works really well.”

Apart from the master bedroom having hand-made “his and hers” built-in wardrobes, the most modern thing about the property is the brand new luxe bathroom. This comes with underfloor heating, Jack and Jill sinks, both a rain shower and hand shower, and low-level mood lighting (handy if you’re just nipping to the loo in the night!).

The whole apartment is laid with solid wood, which not only unifies these various living spaces of living /dining/bathing/sleeping, but gives the place a soft, warm feel, to match the character of the rest.

The side doors are original, from the early 1800s, and have a covenant in place to protect them.

It’s through these double side doors that you access your most prized possession — parking for one car. Yes, parking. Right on Bell Street (don’t faint).

A beautiful, original carriage-sized double wooden gate is your access point to your completely private parking space for number 77. You’ll never be stuck for a parking space again…

Although, this being Bell Street, you’ll no doubt be doing most of your shopping on foot. It’s just a short walk on the flat to all the town’s amenities as well as the Thames towpath, which is a few minutes’ walk away.

All in all, this is the perfect first property/downsize central Henley pad.

l With thanks to Ruth Gibson of the Henley Archaeological and Historical Group.