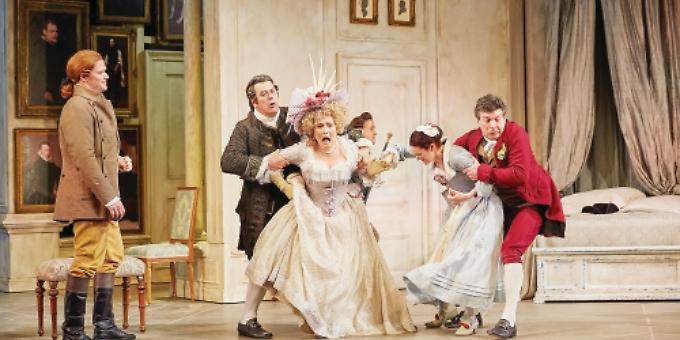 At the Getty family’s Wormsley Estate, home to a semi-permanent opera house, state-of-the art cricket pitch and large lake, you can sample the life of the eccentric landed gentry for a day.

The trick is to arrive early, jump on the antique bus in your impractical evening wear, and head for the walled garden where, this year, the lush foliage helped temper the intense heat.

This visit was made especially worthwhile by an outdoor recital given by two up-and-coming sopranos from the chorus to an appreciative audience sipping elderflower pressé and champagne.

And there was still Le nozze di Figaro and picnics by the lake to come.

This opera’s nonsensical plot revolves around a failing marriage, an impending marriage, a threatened forced marriage and a raft of complications arising from the resulting distrust, jealousy and misunderstandings.

How on earth did 18th century librettists come up with such stories? Despite this, in the hands of Mozart and Garsington’s producers and directors, the depths of human emotion are laid powerfully bare.

The casting for the four principal roles was inspired.

Duncan Rock was the arrogant yet vulnerable Count Almaviva, partnered magnificently by Kirsten MacKinnon as his neglected, unloved countess, whose dominant stage presence grew exponentially as the action progressed.

Joshua Bloom played a maturish Figaro, had a rich baritone voice and acted the part superbly, while Jennifer France, as bride-to-be Susanna, maid to the countess, gave the role everything it needed.

Their combined top-quality vocal and acting abilities raised the underlying farce to riveting levels of intensity.

Each had sung soliloquies in which to grapple with their respective tortured dilemmas and emotions. These were rapturously received.

And there was some brilliant humour too, especially when Figaro discovered he was Marcellina and Bartolo’s long-lost son and surprised cries of “Madre” and “Padre” were bandied hilariously about.

Throughout, Mozart’s music was his most inspired best. There was simply no let-up. Inexplicably, a loss of momentum occurred in Act IV. Was it the sheer unreality of mistaken identities, the design of the garden scene or the over-the-top acting? It is difficult to pin down.

That said, the production was fundamentally outstanding.

It was a relief to see traditional contemporary costume without attempts to modernise or go over the top. The staging was also uncomplicatedly appropriate and the scene changes deftly executed.