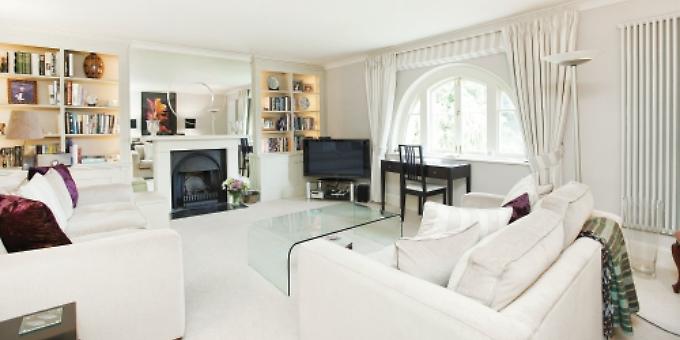 IT’S that time of year again, when locals and visitors alike don their best attire and grab a glass of bubbly by the river.

Standard Property took a day trip down the River Thames, taking in some of the best riverside properties along the way.

WE start our journey at the attractive Olde England town of Wallingford, which is known for its ancient castle and historic river narrative.

Grade II-listed Bridge House was built in the late 18th century and was originally home to Charles Morrell of the well-known Oxford brewers before being divided into four apartments. Number 4 occupies the entire top floor. And it’s absolutely gorgeous.

With spectacular views across the river to the water meadows and hills beyond, this spacious property has three bedrooms, two bathrooms and more than 1,800 sq ft of accommodation.

Location-wise, Bridge House stands right by Wallingford town’s medieval stone bridge, so it’s a level walk of a few minutes to the shops.

Garage parking comes with it too, as do the (shared) riverside gardens of an acre with 160ft River Thames frontage.

A COMPLETE contrast to our previous property, Cleeve Court sits on the river, just outside the picturesque village of Streatley.

Three-bedroom, three-bathroom number 2 has fabulous views of those grounds and, being so private and low-maintenance, is perhaps a good choice as a lock-up-and-leave.

The guide price is £725,000, there is also no chain, and mooring rights are included.

ON the other side of the river — a single bridge separates the villages of Goring and Streatley — is The Pavilion, a family house in a prime riverside location which offers potential for a bit of redevelopment (subject to consents).

Currently there are multiple reception rooms along with four/five bedrooms, three bathrooms and a whole lot more, for a guide price of £2,650,000.

The biggest draw is, of course, the lush gardens of 1.3 acres, with 140ft of frontage to the River Thames.

And let’s not forget this is the Goring Gap. The river runs from north to south here between the Berkshire Downs and the Chilterns, which is probably the prettiest part of the Thames and an Area of Outstanding Natural Beauty, having been immortalised by Jerome K Jerome in his book Three Men in a Boat.

THIS New England-style property has one of the most desirable riverside addresses in this stretch of the Thames — The Warren, Caversham.

Over three floors, Reve House is most definitely a high-end affair, so you can expect to find mood lighting and underfloor heating as well as a wine cellar and private guest wing.

There are five bedrooms, five bathrooms, four reception rooms, a riverside garden and outbuildings — and the stunning drawing room is a focal point on the ground floor with bi-fold doors opening on to a garden balcony.

The property’s designer Helen Weller once said she went for the New England look as it fitted with the waterside setting. As such, there are multiple balconies from which to enjoy the river view.

Helen said: “It really is like a moving screen with the scenery constantly changing every hour, every day and every season.”

ONCE described by Jerome K Jerome as “the most fairy-like little nook on the whole river”, the village of Sonning is the address of this thatched barn conversion.

The house is approximately 400 years old, the barn having been converted in the Seventies (the thatch was replaced only two years ago).

The current vendors have improved the kitchen area as well as converting one of the smaller barns into a master bedroom suite.

There are six bedrooms, four bathrooms, three reception rooms, a conditioned wine storage room and a garage block with secondary accommodation — all in 1.36 acres.

Sonning is a pretty, riverside village with a strong community spirit and a good few famous locals, including our current prime minister. Perhaps she’ll take a boat to see some of the festivities this year?

IT’S Shiplake next, the popular Thameside village that’s thought to have been named after a lost Viking ship that ran around during the Danish Vikings’ attempt to conquer the “last kingdom” of Wessex more than 1,100 years ago.

So for “Shiplake” read “Ship loss”. Possibly. It’s even said that a local property owner knows exactly where the vessel’s secret final resting place is located…

People choose Shiplake as their home for many reasons including strong local community, amenities such as a village shop, gourmet pub and train station, and, of course, life on the river.

On one of the village’s sleepy roads, but close to Shiplake Lock, is this excellent find — The Den — which has a mooring on its river frontage of 50ft.

Of the four bedrooms (one en suite), the rear ones have access to the south-facing garden and river.

Together with stunning views of the Thames, the property’s standout space is probably the first floor reception room which has a vaulted ceiling and double sliding doors out to a decent-sized balcony.

All in all, you get 1,260 sq ft of riverside scrumminess.

FURTHER downstream, but upstream of Henley’s Marsh Lock, Lock Waters is a proper family house that’s fit for a new generation who love a bit of messing about in boats.

This four-bedroom Edwardian property’s biggest draw is without doubt its 140ft River Thames frontage on the Shiplake/Wargrave Reach.

With four bedrooms and two bathrooms upstairs in the main house, plus annexe, together with three/four reception rooms plus the garden room, it provides about 2,172 sq ft of waterside accommodation.

There is also a garage block/
workshop and a wet boat house in the glorious mature garden.

AS you approach Henley Bridge, one of Henley’s most iconic buildings, Royal Mansions, comes into view.

Once a luxury hotel to the Edwardian elite who swarmed to the royal regatta Henley is still known for, Royal Mansions was transformed into apartments in the Twenties and Thirties.

There is currently more than one of the partments for sale, including number 6, which is on the second floor.

With accommodation of almost 1,400 sq ft, and quality fittings and fixtures such as marble surfaces and a five-oven Aga (as well as separate gas hob), number 6 is a classy prospect.

The highlight is definitely the drawing room — a very generous 22ft by 14ft with an attractive reclaimed feature fireplace and views over the river and Henley bridge.

The property has two double bedrooms and its own hallway, along with an en suite bathroom, utility room and separate WC.

Robert Ingram, who has owned the property since 2011, says he bought the apartment for all of these reasons.

“Living here, you are close to everything,” he said. “Plus I love those high ceilings. It’s a very comfortable apartment and has got excellent facilities.”

He added: “This is the perfect location. You have those river views, with sight of Henley Bridge, but you can still walk to the shops, restaurants and train station — which I use quite a lot.”

There is lift access to all apartments, including a disabled sensor-activated entrance, should it be required.

AND so we’ve arrived at our destination — Thames Side in Henley. Arguably the best of our town’s streets from which to view the regatta from the north bank.

Properties on Thames Side do not come on the open market very often, so it’s quite special to find a property here that is directly opposite a load of river moorings (which are available for rent).

For sale at a guide price of £1,675,000, The Mooring doesn’t come cheap, but for that you get a beautiful Grade II-listed house with panoramic views of the Thames.

There are four bedrooms (three with en suite bathrooms), an annexe and a beautiful, secluded garden.

The annexe offers flexibility, too, either as a self-contained bedroom with en suite or as a gym or art studio.

There are French doors opening directly on to the garden patio — plus there’s independent access to the street, allowing for a potential rental income.

The last thing to say on this fabulous property is that here you are absolutely dead-centre in Henley.

Once again, you’re eligible for a resident’s parking permit, but more importantly it’s a flat walk to everything including shops, theatre, restaurants, cinema and train station — as well as access to footpaths along both sides of the Thames.

Idyllic and definitely Standard Property’s top choice for a memorable way to spend your Regatta trip.