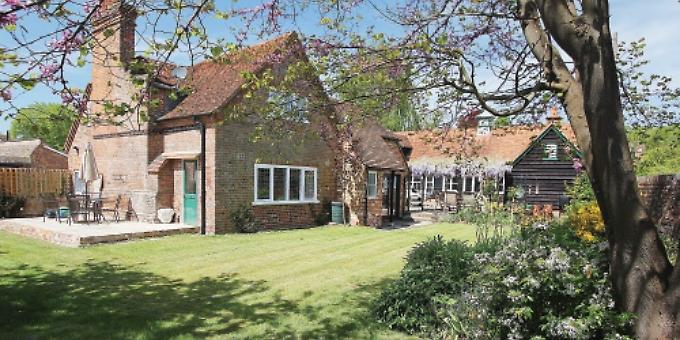 IN the desirable close-knit Thames-side village of Whitchurch — known for its café/river culture and historical interest — a wonderful 33-acre property has just come to market.

Let’s start by dipping into the past. Originally part of local manor Walliscote House, Walliscote Farm’s history goes back hundreds of years, with “” thought to mean “one who comes from Wales” and “cote” being the Old English word for “shelter for mammals or birds”.

Which is most fitting, as more recent history has seen Walliscote Farm working as a thriving dairy, producing milk for the village.

Started in the Thirties by the Aldridge family, who have owned the site since 1937, the dairy finally closed its barn doors in the Seventies (although cows were kept here until the Nineties), and the family converted the dairy and outbuildings into premises.

Walliscote Farm — the name collectively describing three detached properties, as well as 33 acres of land, and 47 River Thames boat moorings — is remembered well by brother and sister Vincent and Geraldine Aldridge, who grew up in this idyllic setting.

“We had a herd of 60 Ayrshires, used for milking and the creamery,” recalls Vincent. “But once they went we kept rare breed White Park cattle for 25 years. The White Parks actually belonged to a friend, also living in Whitchurch, and were bred by the owner. Some were sold as calves to others interested in this rare breed cow.

“But we found them to be very good at keeping not only the but the brambles and nettles, under control — they’re not fussy about what they eat!

Estate agents always talk about the importance of buying a property in a good location — just ask Kirstie and Phil. So what of Walliscote Farm’s position, in the middle of Whitchurch high street?

Seeing as you’re dead in this village — which is not only a conservation area but part of an Area of Outstanding Natural Beauty — Walliscote Farm is ideally placed.

Yes, you can walk to local pub The Greyhound, as well as over the toll bridge to neighbouring Pangbourne (for shops, train station and other amenities). And yet your home is a rural haven, where you can lose yourself in the landscape, river and gardens.

“It’s so quiet here,” adds Katherine Singleton of Dudley Singleton and Daughter, the agency acting for the vendors.

Simply put, this is a property that offers a whole lot of character. The warm and welcoming detached farmhouse, The Farmhouse — formerly known as The Old Dairy — is constructed of flint and brick and possibly dates back to the early 18th century, with some later 19th century and extensions.

While touring the property, Standard Property was clearly able to see the Aldridges were careful to preserve all the best features of the original building when they converted it.

More recently, the farmhouse has undergone refurbishment throughout, as well as redecoration, so it’s in pristine condition.

Behind the farmhouse, and separated by a farmyard-style drive, is The Hen House, which would make an ideal three-bay garage or perhaps even a separate annexe or office.

At the moment, it is a working microbrewery run by the Aldridges. For details, see www.henhousebrewery.co.uk. To the left of the farmhouse is an annexe called The Fowl House — an 18th century converted outbuilding.

This has also been reworked with care to make the most of features such as the oak beam vaulting, creating a mezzanine from the old hay loft, and preserving nook and cranny aplenty.

Great for a family al fresco dinner. But it also offers more scope than just a post-work chillax.

Which brings us to the final piece of the puzzle — potential.

Katherine Singleton thinks it would be quite straightforward to link the two buildings, with the idea of forming a larger and unique family home (subject to the usual planning consents).

“The properties are only separated by around six metres where the pergola terrace currently stands,” says Katherine. “An architect could have a field day thinking up all kinds of interesting ways to do this.”

That being so, Vincent Aldridge says the Fowl House has always worked well for the family as a separate annexe.

Whitchurch Farm’s driveway is a long one. you arrive at the property’s pièce de résistance — the 33 acres of green and pleasant land. These former dairy cow grazing pastures hug the River Thames — hence the 47 moorings also offered, covering 1,463 feet over 1.18 acres of frontage.

The moorings are offered individually at a price of £3,527 per metre (boat not included!). Each mooring is listed separately, with its own quaint detail, such as “between of metal posts”, “cream metal ” and “centre of tree”.

And we’re back to location. The mooring positions are rather outstanding, opposite gourmet inn The Swan in Pangbourne, and just upstream of Whitchurch Lock (at the downstream end of the beautiful Whitchurch to Goring reach of the Thames).

Of the moorings, Katherine Singleton says: “What’s special about these moorings is the position. Being part of the Walliscote Farm estate, they have the advantage of secure, private access via the ‘hidden’ farm entrance.

“Nobody knows how to get to your boat apart from those who own a neighbouring mooring, making it super safe. Should you wish to travel car-free, it’s also possible to walk to your moored boat from the nearest train station at Pangbourne on the opposite side of the river.”

And what of the pastureland? Katherine Singleton says: “As well as fancying the idea of owning a boat but with the convenience of being able to walk to a train station to London or Oxford, I envisage Walliscote Farm as being ideal for a family who perhaps horses.”

Which would be a very fitting next chapter for this historic “shelter for mammals”.

l Notable points: a great character property with gardens and grounds of 0.77 acres in total. Location is everything here as Walliscote Farm is a stone’s throw from the River Thames as well as amenities such as shops, doctors/dentists, and a mainline train station (London to Paddington in 47 minutes in the morning rush hour; Reading in 11 minutes any time of the day, which will also link to Crossrail). Whitchurch is also within easy reach of excellent state and private schools.