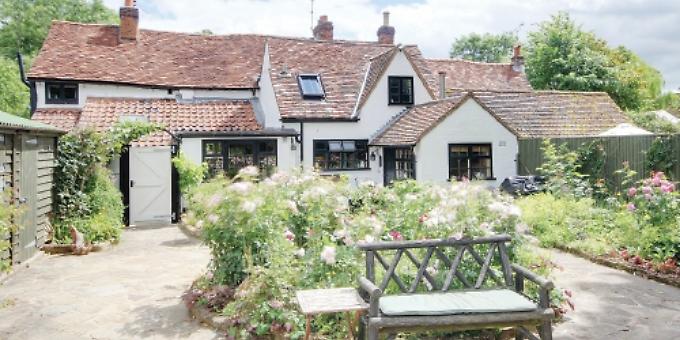 The owners of this quaint 16th century cottage have put years of love into restoring it to its former glory, says LUCY BOON

RESIDENTS of the cherished village of Waltham St Lawrence guard their secret well.

In fact, you might even say that the locals have a history of taking things into their own hands.

Village pub the Bell is a true “local”, remaining jointly owned by those who live here via a charity (the inhabitants of the parish and their heirs were made trustees in 1608).

Charity trustee Nigel Backer says: “All rents from the Bell go to people in need in the villages of Waltham St Lawrence and Shurlock Row.”

Nigel is also runs the Waltham St Lawrence Oil Club. For while there is mains water and electricity, this is a village with no piped gas, so properties rely on bottled gas and oil tanks — and as such it makes sense for residents to get the best deal by buying in bulk.

Nigel and his wife Michele have lived in Waltham St Lawrence, for 16 years at 2 Paradise Cottages — a stunning 16th century Grade II-listed cottage on the village’s main thoroughfare. (Well, there is only one…)

Inhabitants also include beloved boxer dog Roxy and “occasional grandchildren!” according to Michele.

The couple bought the property because they fell in love with the warmth and character of this charming cottage, as well as falling for the village. “All the right reasons you choose a property of this type,” says Michele.

This row of three cottages was once used to house staff for nearby Paradise House.

The house has such a layout as to offer lots of usable spaces, which the couple have found work very well for them, and each space offers a wealth of interesting features such as sloping roofs, gabled windows, stable doors, exposed beams and working hearths. Although it wasn’t always this way.

Since living at 2 Paradise Cottages, the couple have worked tirelessly to renovate and improve, including creating a bespoke kitchen out of 100-year-old oak, and improving the fabric of the cottage to allow the walls to breathe.

“Over the many years, people have put all the wrong materials on the walls, so we decided to remove all the old plaster from the original part of the cottage downstairs, and start again,” says Michele.

These walls were then replastered with lime mortar and decorated with chalk-based paints.

Nigel adds: “The original front door had already been blocked up. When the old plaster was removed and the back of the door was revealed, it was a shame to find that it wasn’t as attractive as we’d hoped, so we decided to plaster over it again. However, it could easily be reinstated if so desired.”

The house is currently entered via the rear garden.

Renovating the house had another advantage — the uncovering of hidden gems such as an ancient oak window lintel and small beams in the walls.

“You can literally see all the times the cottage was extended over the years,” says Nigel. “The back of the house moved further and further into the garden, as and when the inhabitants needed more space.”

For the Backers, renovating 2 Paradise Cottages was a labour of love.

“Well, you don’t buy a house of this type if you don’t appreciate all the history that goes with it,” says Michele. The couple are most pleased with the living room, with its mellow reclaimed oak fire mantel and herringbone-style 300-year-old brick hearth.

“In winter, Roxy loves to curl up in front of the fire,” says Michele. “This is my favourite room, too in winter. It’s lovely and warm and cosy.” In summer, the courtyard garden is a peaceful enclave of climbing roses. For those who want more, the village allotments are directly opposite the cottage.

Nigel has fun “dabbling” there, renting a plot for the princely sum of £15 per year!

He recalls: “There was once a large pond at the allotments, and our cottages were then called Pond Cottages — all three of them.”

At the back of the cottage, the view from the garden is one of mature parkland.

This is not only conservation-protected, but in the autumn, when the vegetation dies back, it reveals a pretty lake belonging to neighbouring Paradise House.

“It’s so quiet here, and it’s completely private, which is part of what makes this property so special,” says Nigel.

Indeed, for the right buyer, 2 Paradise Cottages is paradise found.