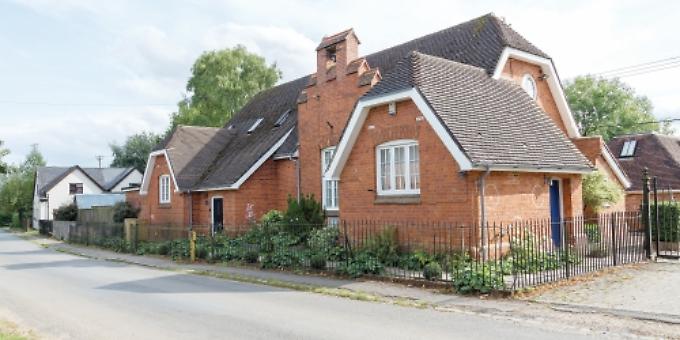 It’s ‘Back to School’ week at a
four-bedroom conversion that’s new to the market — so don’t miss out on being teacher’s pet, says LUCY BOON

AS the kids all return to school this week, Standard Property decided to go “old skool” in Nuffield at a clever conversion that is far from child’s play.

Ah yes. The first week in September. That time of year when teachers and students take a deep breath before diving into a new school year — and mums and dads breathe a sigh of relief after a (very) long summer holidays.

But what if you were at school all year round? This is what the Davies family decided to do when they moved into The Old School in 2007 — Nuffield’s former village school, which was converted by a developer in 1997.

Tucked away down a quiet country lane, about six miles from Henley, the house has a contemporary vibe that feels warm and welcoming, and yet it still retains the original character of the building.

So you’ll discover original beams in the master bedroom, as well as a bell tower with original old school bell.

“It would still work if you connected the mechanism,” says mother-of-two Jill.

“I also like the original library shelves in the living room. If you look closely, you can see they’re covered with old stamps and children’s doodles.”

Ceilings are high and lofty with many being vaulted, and there are engineered oak floors in many of the rooms.

All the major rooms are of a good proportion. Some of the windows are double-height, too — now fitted with colonial-style shutters — and these allow daylight to flood the house superbly.

But the best bit of the house, as you’d hope, is the kitchen/family/dining room, which has two sets of French doors to the expansive child-friendly garden.

It’s just lovely. As is the rest of the house which has a mix of tasteful interior choices like limestone and wood, and head-turning features such as a wood-burning stove in the living (sitting) room.

There’s also a snug/TV room, a study, and handy ground floor family room with en suite bathroom — a kind of mini-annexe, if you will.

And yet there is also a one-bedroom annexe (with bedroom/living room and bathroom upstairs and kitchen downstairs) over the separate three-bay garage block.

Needless to say, there are lots of flexible living options with this property.

“This has been a brilliant family house,” says Jill, who has a personal connection to the property.

“My mother was a teacher in Sonning Common and remembers going to meetings here, when it was still a school. My friends’ kids also went here.”

Although that isn’t the reason the Davies family fell for the property. “We had been searching for our family home for four or five months, and The Old School was the only house that we walked in to and immediately felt ‘Yes, we can see ourselves living here.’ It was so unusual, not like a mass-produced house.”

Just under the bell tower is a faded inscription saying when the school was opened, and at one end leftover markings from a children’s mural are just about visible.

“There was a sign saying ‘Welcome to Nuffield School’ on the day we moved in, too!” says Jill. ”It was really touching — the seller had left it for us.”

Nearby Nettlebed is the nearest place for amenities, such as a doctor’s surgery, farm shop/café, post office/shop and so on.

Most importantly, it’s also the place of the property’s catchment school — Nettlebed Community School — which has an “outstanding” rating from regulatory body Ofsted.

Jill adds: “There’s a school bus which goes there, right from outside our door.”

But if you go to The Old School, you’ll learn that for yourself.