Shiplake cottage is cream of this year's harvest crop 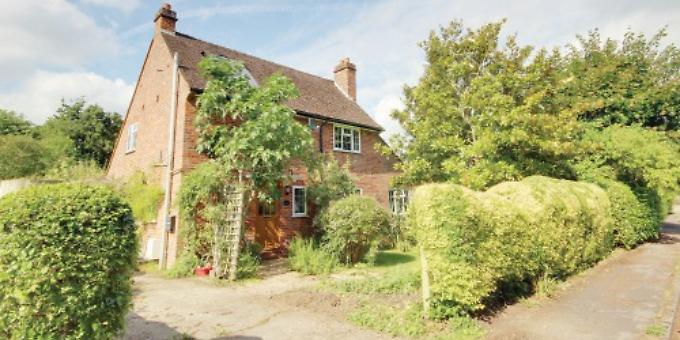 Venture down a no through road in Shiplake and you’ll find a house where the same family have been enjoying the fruits of their labours since 1954, says LUCY BOON

AS the end-of-summer chill reminds us it’s time for harvest festival, this week’s property bears quite a bit of fruit.

Field Cottage in Baskerville Road was once a smallholding of six acres, even featuring in an issue of Smallholder magazine, when Poppa Bowers and Nana Phillips moved in, in the Fifties.

Like two peas in a pod, the couple started growing strawberries and other produce for a living, supplying local suppliers in Henley and Caversham as well as selling hen and duck eggs in Shiplake’s farm shop — which is still around the corner from the property.

But, as happens in farming all too frequently, it’s either feast or famine, and a few years of early frosts and poor harvests meant the smallholding could no longer cut the mustard.

The majority of the land was sold to property developers, and by the time of Poppa’s death in 1981, only a swathe of rear garden remained.

Nana’s son Stuart moved in with his wife Anne Marie and their two children, Howard and Marie Agnes, soon after, which necessitated the building of an extension as well as an annexe to accommodate the larger family.

“Nana had green fingers, and kept the growing going,” says Anne Marie. “Stuart and I had office jobs and just worked on the garden for pleasure, really.”

Which the extended family did entirely organically — long before going organic became the fashionable thing to do.

“Faced with a quarter acre of garden, albeit laid out to fruit and vegetables, we were able to develop and expanded on our alternative lifestyle and organic principles,” recalls Anne Marie.

“We were hippies, really, and thought chemicals were just too complicated. We said we’d just trust Mother Nature — and the produce tastes so good, too. The children got involved in the jam and preserve making — it was a really fun time.”

Pests were kept at bay with vinegar (weed killer) and a resident family of hedgehogs (snail/slug-eaters).

“Although, we later realised that growing things in raised beds and crop rotation really helped too,” adds Anne Marie.

Through the years, the garden has kept the family well supplied with fresh seasonal organic produce, including a mixture of herbs and vegetables.

“The asparagus has been so prolific this year that we’ve had to give it away,” says Anne Marie.

Strawberries and soft fruits are a favourite, plus the apples, pears and plums are abundant at this time of year. The family thinks Field Cottage’s orchards are among the oldest organic orchards in the area.

“We still use rainwater for irrigation,” says Anne Marie. “We have tried very much to be self-sufficient. And, in fact rainwater is far better than tap water for plants and wildlife.

“There are about 12 butts around the house and outbuildings and they always seem to be full! We also use this water to fill the pond.”

This is in one of the middle sections of the garden, which has been laid out in distinct segments, including a lawn/entertaining section, rockery/pond area/, fruit cages and chicken runs.

Anne Marie will certainly miss the garden, in all its guises, when she relocates to the Dordogne in her native France.

“My daughter is already there, and since Stuart died a few years ago I’ve decided to join her there. She’s already growing strawberries and follows in our footsteps by making jam,” says Anne Marie, who adds that the Dordogne reminds her of the Henley area with a “similar climate and changeable weather”.

She says: “I’m planning on expanding the alternative life to the good life, complete with the odd goat, to keep the grass down.”

So Field Cottage is looking for new owners who will love the land just as much as the charming four-bedroom cottage that goes with it.

This is a homely, quirky affair with solid oak floorboards and reception rooms that overlook those well-loved gardens. The vibe is warm, welcoming and happy — you can tell there have been quite a few memories created here.

“The lounge overlooks the spectacular magnolia tree and has views of birds on the feeding tables as well as the outside entertaining area — a magnet for old and new friends alike,” says Anne Marie.

“Add a marquee on the lawn for the English weather, sizzling meat, popping corks, strumming guitars and you have the tried and tested ingredients for many a raucous party. Fortunately, the neighbours have all been very understanding.”

She adds: “All of these memories are what makes it such a hard decision to sell. We have all experienced such huge joy living here — as well as some big challenges.”

The dining room is a spacious room with corner brick fireplace, while the kitchen is a fun, bright Fifties-style affair, complete with Marmoleum flooring. It’s spot on for retro charm.

Standard Property would advise potential buyers to embrace this and introduce their own stamp, while retaining some of the original pieces, such as the handcrafted oak units with built-in butcher’s chopping block and marble pastry rolling area.

The sitting room is another handsome room, with a wood-surround fireplace, reclaimed floorboards and recessed down lights — the antidote to early autumn chills, once the harvest has been reaped and it’s time to retreat to a cosy enclave.

There’s also an annexe, with its own front door, bathroom, kitchen and living room — although this could be brought back as part of the main house.

There is certainly some scope for improvement, with lots of potential that can be very easily realised.

The current décor/layout is easy to live with, so any changes could be carried out in no rush.

A long term goal could even be venturing into the attic (subject to planning permissions), for the creation of a master suite with dressing room and bathroom. At the moment there is just access to the loft, which is partially boarded.

But it’s the location of this pretty place that’s most interesting. A cottage of this size doesn’t often come with so much land. Plus it is on a no through lane and minutes from the village centre, with buses to local schools and the train station (Paddington in 40 minutes or so), as well as being close to those picturesque Thames towpaths.

All this talk is sure to have whet some appetites. So if you’re a buyer on the lookout for your life to be a bowl of cherries, Field Cottage is certainly food for thought.

⚫ Land: quarter of an acre