Revamped townhouse is back on the market 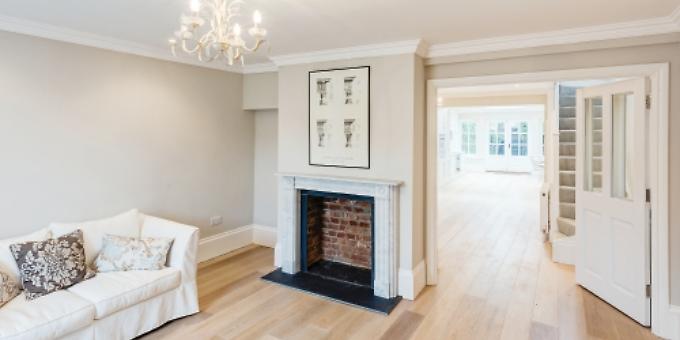 Two years ago, LUCY BOON witnessed the transformation of 10 Albion Place, West Street — a listed Georgian townhouse with parking just yards from Henley town hall. Now it is up for grabs again following a revamp...

BACK in 2015, Standard Property investigated a potential story. Philip Booth Esq — a new estate agency started by the well-respected local property expert of the same name — was launching and had its first property to sell. Number 10 Albion Place, West Street, Henley.

This much-loved Grade II-listed Georgian town house had been home to the Shepherd family for some 27 years and most people knew it for its recognisable “flat” silver birch tree in the front garden.

But before Standard Property could even take a peek, the house had seen a bunch of offers which led to three sealed bids — all above the asking price.

Fast-forward two years and 10 West Street is once again for sale, having been completely refurbished and given a fresh new look and a new extension by the owner.

A new central heating system was also installed and the house completely replumbed with new bathrooms and a water softener, as well as totally rewired.

The new owner fell in love with the house. He said: “I love Georgian houses for their character, good room sizes and sensible layouts. But having been last updated about 40 years before, it needed a major overhaul.”

The history of the house also adds to its charm. As the vendor says: “I love a good period property. And this one came with all the space I was after, plus parking, in a town centre.”

The Albion Place site originally housed one of Henley’s former malthouses, replaced in the early 1800s with what we see today — a terrace of five Georgian houses with front and rear gardens in West Street — although records show that West Street higher up the hill was mainly tenement housing.

“The house already has a good layout, so I kept that the same, just adding a new rear extension for a much better kitchen,” said the vendor.

He also kept the utility room in the basement and a downstairs WC. However, the look is now totally different — as witnessed by these photos.

It’s amazing how much you can change the look of a space with neutral colours and a few clever light-bouncing techniques.

The kitchen has been replaced with a new extension, lengthening it as well as extending it sideways, to stretch the width of the property, with French doors to the garden.

This makes more of the available space, as well as utilising the courtyard for entertaining.

Since the vendor had planned to live in this property for the rest of their life, a lot of work went into the kitchen to make it extra-special.

Cabinets and worktops are totally bespoke, from local craftsman Martin Leighfield, who gave the kitchen a 21st century Shaker look in white quartz and painted wood.

Plus there is not one but two ovens, a waste disposal unit and a hot water tap.

A second skylight in the form of an attractive orangery-style roof lantern also lets sunlight flood the room to make it seem extra-spacious.

As does the use of engineered pale oak, which flows seamlessly between rooms on the ground floor.

This choice of colours and materials has helped sunlight transfer through the centre of the house, too — which is unencumbered by a tailor-made folding glass door that can be used to separate the living room from the dining room when needed.

Each reception room’s fireplace has been given a new marble surround (the buyer gets to decide whether they want these to be wood-burning or gas). Yet original features have been treasured, and there are plenty of character features to appreciate such as the plaster cornicing, sash windows and original wooded shutters in the living room. It’s all very lovely.

Throughout the house you’ll find muted shades of cream and white with “greige” carpets and champagne golds. New bathrooms have underfloor heating and de-misting mirrors.

There are three bedrooms in total, and two new bathrooms. However, planning permission and listed building consent is also in place to convert the boarded loft space if more space is needed.

In addition, a car can be parked in front of the garage and the rear gates to the garden can provide a further parking space if required.

The original windows have all been repaired and re-draught proofed. Structural works have been carried out too, such as floors being strengthened, the roof repaired and the chimney repointed.

“Since the vendor had intended to live here himself, he’s put his heart and soul into updating this charming building, working to a very high standard,” says Phil Booth of the agency selling the property.

He explains how when the vendor’s sale of his existing Wargrave residence fell through, he had to stay put and sell Albion Place instead — which is why we have such a beautiful property back on the market after just two years.

Properties in Albion Place don’t often come up for sale and yet, coincidentally, Philip has only just sold another in the row.

“The end house has gone to downsizers who had been living in the outskirts of a large town. I just asked them how they like living here and they said, ‘We keep thinking we’re on holiday! We can pop to a café whenever we want!’ They really appreciate Albion Place as a location. You get such a large house — with a garage — right in the centre of Henley.”

All properties in Albion Place have a private garage behind their gardens, approached via West Street.

Albion Place is metres away from Henley’s town hall/weekly markets. Which in turn means you’re a short walk from shops, restaurants, the theatre, trains, River Thames, even GPs and Townlands Memorial Hospital.

As the vendor says: “The location in the centre of town is very convenient for all that Henley has to offer. Yet the road is very quiet as it is one way and not a short cut. Having parking for up to three cars and a small town garden helps it tick all the boxes for me.”

The previous owners, the Shepherd family, had lived at number 10 for 27 years and as Phil Booth says: “It’s likely the next owners to live in this charming property will do the same.”