Chocolate box cottage is perfect for hide and seek 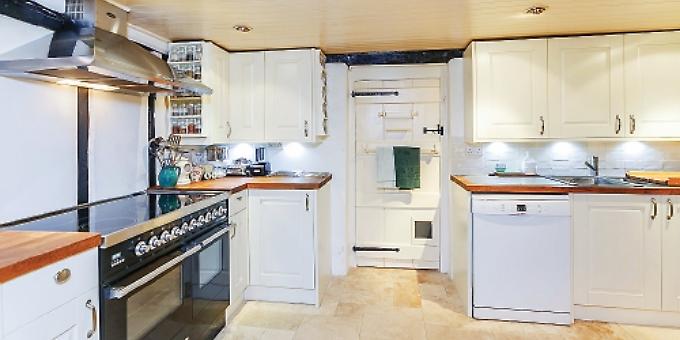 THIS week’s star property is a charming 16th century cottage with inglenook fireplaces, exposed stone walls and part-thatched roof, tucked away in the hamlet of Postcombe.

Where is Postcombe, you may wonder? Well, it’s in between Watlington and Thame in the Chiltern Hills and has amenities such as a shop, that’s also a garage, the England’s Rose pub and hotel. It’s also close to the M40 and Lewknor, handy if you want to catch the Oxford Tube bus (Victoria railway station in one hour), or make use of Watlington’s amenities (five minutes by car).

“We love Elsdale Cottage — it’s such a characterful building,” says owner Carolyn Sinclair, who has lived at the Grade II-listed three-bedroom property with husband Mark for the past 29 years. “It started life as three terraced labourer cottages, with the thatched part being the oldest.”

The Sinclairs once met a former inhabitant who lived in the kitchen end of the house. “We had moved from London in the Eighties and when we were first getting to know the locals there was a seventy-something man who said he had lived in the non-thatched ‘house’ out of the three original cottages. He said he’d grown up there — in a family of nine!”

Now one large property, Elsdale is a mix of timber frame and white-washed brick and chalk infills, standing behind a pretty white picket fence. Named by previous owners, Elsdale offers a very warm home to those in search of something a bit special.

This, as agent Nick Sherston of agency Robinson Sherston explains, is because: “The house has not been messed about with too much. It has not lost any of its soul.”

When the Sinclairs moved in during the Eighties, the three-in-one cottage was in poor repair. They had to start from the basics upwards, with the rewiring, rethatching and wall maintenance being priorities. Water-based paints for the wattle and daub walls in the sitting room, and redoing the lime mortar elsewhere were good lessons learned. However, the layout was already working well, so they didn’t have to make structural changes.

Carolyn says: “The layout was already there and it really suited us — often with these sorts of properties you have to go through one bedroom to get to another but this one doesn’t have any of that.”

This is a view also held by Nick Sherston, who says: “The flow is good and it feels quite open and spacious for a thatched cottage.”

The Sinclairs’ décor and taste has also helped achieve this, with olde worlde charming touches, a country-style kitchen, and Fired Earth tiles.

Carolyn says: “I love it all — everything we’ve done we’ve done for love of the house. And we’re been really happy here. It’s lovely in the summer and cosy in the winter thanks to the thatch, which regulates indoor temperature.”

More recently, the couple were able to focus on more “fun” improvements to the property, such as getting the garden landscaped. Importantly with a property of this age, though, the Sinclairs have kept Elsdale in perfect shape, with constant maintenance.

And yet, although the owners have beautifully manicured this place — adding double window panes, central heating and an alarm system in the process — the history is still what strikes you when you enter this charming olde-worlde cottage.

Elsdale would be a great house for a game of hide and seek (note all the hidden doors, secret cupboards and cubby holes), and perhaps an ideal setting in which to throw a Halloween party.

Outdoors, the stunning low-maintenance rear garden (with water feature, of course), has an entertaining area, which can be accessed through the living room’s French doors. There is also a hidden irrigation system, to make watering a cinch.

“We travel a lot, so it’s handy when you’re short on time but love nature,” adds Carolyn. “In fact, we love to travel so much that we’re moving to Italy — which is why we are selling up.” The Sinclairs both say they will dearly miss Elsdale, which has been their home for a very long time, as well as Postcombe as a location.

Carolyn says: “We know all our neighbours, and we help each other out when we need help. And yes, at Halloween children do come trick or treating. I always make sure I’m prepared for October 31, ever since about 10 years ago when I’d forgotten it was Halloween, and came home from work to find trick-or-treaters calling.”

She added: “I had nothing treaty in the house, and was mortified to have to offer them a piece of fruit. Safe to say, I’ve learned my lesson!”