Family home has 'festive' feel the whole year round 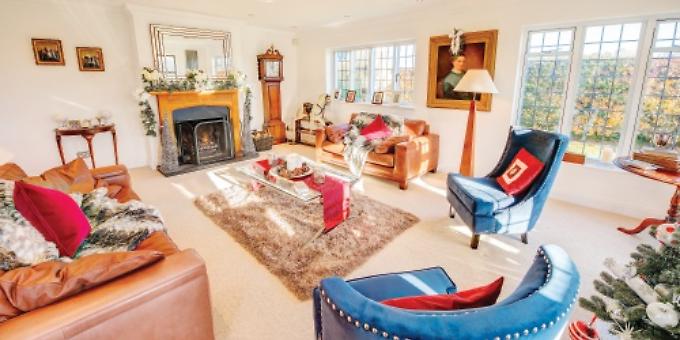 THIS week’s “star of wonder” property in the village of Hurley is called Field House for good reason.

Surrounded on three sides by grazing land where the cattle can often be found lowing, the address of Shepherds Lane refers to there having once being a shepherd’s cottage where Field House now stands.

The property was enlarged significantly in the Forties, with the original cottage becoming what is now the living room.

But although Hurley village still has its farming families, who graze their cattle and sheep on the lush riverside pastures, there are many more who have moved here for other reasons.

Just downstream of Henley, and upstream from Marlow, Hurley is equidistant between the M4 corridor and the M40 corridor, which can be bridged by the A404. It’s also not far from Maidenhead mainline train station for a 23-minute commute to London Paddington (when Crossrail opens in 2018, this will allow direct access to the City and Canary Wharf).

Hurley is not a town but a small village, and a very pretty and historic one at that, with many charming period properties, as well as a village shop and post office.

It also has a very long high street, which is a no-through road that leads straight down to the Thames — a wonderful spot offering lots of riverside recreation, including a
lock-side café in summer.

Residents nurture their well-loved community, which offers a local cricket club, tennis club, pre-school, drama club and more, including the annual regatta and village fete, which takes place on the village green by the 11th century church.

Hurley has a unique history that’s well worth delving in to. Plus there’s the bonus that it has a well-regarded primary school nearby and is in the catchment area for some of Buckinghamshire’s sought-after state schools.

No wonder Hurley has long been popular with families.

One of them is the Tafi family, who have lived at Field House for some 13 years.

In classic London feeder market tradition, Wendy and Diego Tafi traded their Fulham apartment for a comfortable family home in the commutable country, where they could raise their two young boys.

Wendy said: “We were looking for an escape from London and came out here for the schools and the safety. We discovered that Hurley is a great village — we truly love it.

“It’s so friendly. The local pubs [The Rising Sun and The Bell] bring people together, and I can honestly say I’ve got the best neighbours in the whole world. ”

With views of Danesfield House on the Buckinghamshire bank of the Thames, Field House ticked all the Tafis’ boxes when they found it.

However, there was quite a bit to do to bring the house up to scratch.

“It was the right house but it needed work. We completely gutted it and reconfigured the inside rooms, both up and downstairs,” says Wendy.

Along with new plumbing, electrics, boiler, bathrooms, kitchen, underfloor heating and flooring, there was enough to do to keep the project going for a couple of years.

Downstairs there are a host of liveable spaces which family members of all ages can use to socialise or hide away from each other.

“When our boys were little we used one of the reception rooms as a playroom as it was easy to keep all their toys contained,” says Wendy.

Crucially, the current layout makes entertaining a piece of (Christmas) cake. Wendy says her teenage sons regularly have groups of friends staying the weekend and yet she doesn’t feel pushed out of the way.

“The house works really well for entertaining,” she confirms.

Thirteen years on, some of the rooms are newer than others.

Explains Wendy: “A room gets updated every few years — be it worn out fixtures or sanitary ware or just painted. For instance, the master suite bathroom is only a few years old.”

And so when visiting Field House herself, Standard Property was impressed by how decently maintained it is, throughout.

“We were the ones to redo the back extension and put the folding doors into the kitchen area, too,” adds Wendy of the spacious kitchen-diner with adjacent snug. This is a space which flows extremely well and incorporates two sets of folding doors that overlook the back garden, meaning one side of the house can essentially be left opened to the elements in summer.

Skylights also help sunlight stream through this room, to the very heart of the house — even in the middle of winter.

Wendy says: “Even though the back garden is north-east it gets full sun all through the year as it’s not over-shadowed.

“It also means we get decent light in the kitchen-diner section. making it a great space for entertaining — especially at Christmas.

“Ours is a ‘shoes off’ house, and the underfloor heating under the limestone tiles makes serving the turkey and trimmings in bare feet possible.”

And when Christmas dinner is over, retreating to the “drawing room” is the order of the day, made all the better by a roaring fire in the oak-surround hearth.

As Wendy explains: “While in summer we just leave the bi-folds open all day long and practically live in this back part of the house, in the winter time the living room comes into its own. It’s a great, cosy place to curl up.”

Facing due south, the living room is also ideal for when it’s a case of “red sky at night, shepherd’s delight”. “I need light — it keeps me happy,” says Wendy. “And in winter the living room light has a bit of a magical quality, which makes playing charades or board games at Christmas a bit more special.”

At the local branch of Hamptons International at 14 Hart Street, Henley, which is marketing Field House, senior sales manager James Butler has this to say about the property.

“This is a fine family home with over 3,000 square feet of internal space. But the setting and the location that comes with it, is what makes it such a special proposition.”

Wendy agrees, saying she thinks the people who buy Field House will love it for all these reasons.

“In Hurley you can decide to either immerse yourself in all the local activities or just stay under the radar,” she says.

“This house makes both worlds possible.” So although she will miss the house — especially for how bright it is — mostly it’s the village she’ll find hard to leave behind.

“There’s always so much going on — cycle paths, bridleways, local shoots, rowing, local football events, and then there’s all kinds of sporting opportunities down the road at the national sports centre Bisham Abbey.

“There’s also all the culture to be found in Henley, with its literary festival, food festival and regatta. And it’s all on your doorstep.”

• Other: study, garage, utility room, downstairs WC, driveway and front garden as well as large back garden with outbuildings, location on the outskirts of Hurley village