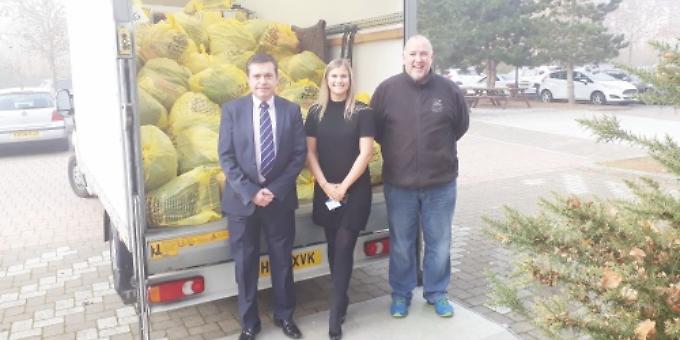 PROPERTY services company Romans is supporting not just one but a total of nine local charities — each nominated by members of the team.

One of the nine charities they are sponsoring is Naomi House and Jacksplace, a children’s hospice in Winchester.

Over the last few months, the team and the wider Romans network have been clearing out their closets and
de-cluttering their homes to fill up 234 yellow bags which have all been donated to the charity.

The donated stock will be sold in the hospice’s stores to raise funds for the children who rely on their care and support.

John Egan, head of retail at Naomi House and Jacksplace, said: “This has to be one of the largest one-off stock donations we’ve ever had!

“We’re so grateful to the staff at Romans for their incredible support. Our shops need more and more stock over Christmas and this will really make a difference.”

It is estimated that the donation could be worth up to £6,500 — which is enough to fund two months’ nursing care for a child at Naomi House.

After visiting the hospice in Sutton Scotney, the team from Romans were inspired to continue their fund-raising and have since supported the charity by taking part in a quiz night and sponsoring their Christmas carol concert.

And they aren’t stopping there...

“We are hoping to do a second drop-off with even more bags and have called upon our landlords and tenants to help us top this fantastic total of 234 bags,” said John Maslin, lettings manager of Romans in Winchester.

With nine charities to support, the group has a busy calendar of charity events covering everything from skydives to bake sales — and even a fund-raising trek along the Great Wall of China!

Vanessa Foot, culture and community manager at Romans, said: “Working with local charities is extremely rewarding and is one of the best parts of my role.

“Having listened to our employees and partnered with a range of charities nominated by them, we’ve really hit the ground running — watch this space for more updates!”

As well as working with the chosen charities, Vanessa and Romans’ community and culture team have also been working with local schools and sports clubs continuing to offer not only sponsorship but mentoring opportunities, careers guidance and incentive schemes.