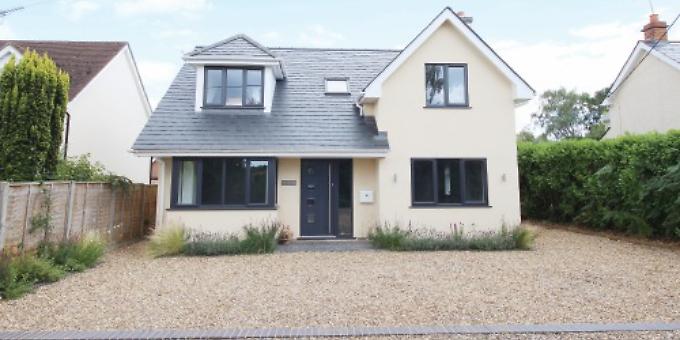 LAST week we looked at finding you a “forever” family home with a large garden, yet still in the centre of Henley.

A bit of a tall order, but we found one. So this week, we’ve found the equivalent — at a more palatable price, too — in one of Henley’s surrounding villages.

Chalkhouse Green, Kidmore End, Gallowstree Common and Tokers Green are located within South Oxfordshire, close to the Oxfordshire-Berkshire border. There is schooling in the way of a playgroup and a primary school (including a school bus service), as well as a pretty church, picturesque village well, a residents village hall, park/playground and a whole lot more, including miles of woodland walking and bridle paths. It’s a glorious area that’s great for families.

And this is the very area where you’ll find a beautifully extended and remodelled family home with far-reaching views of open countryside, in a no-through road that ends with a farm.

Four Winds was once an “ill suited” bungalow with low EPC ratings, in Chalkhouse Green. Fast forward several months and Four Winds is one of the smartest properties in the street — and locals have been quite vocal in their praise of the finished project. So much so, that one resident has even replaced their property’s roof to match.

It is the first project of 26-year-old Jack Jiggens, who laboured on and directed the build, while working closely with his experienced builder father Malcolm Jiggens, 59, and local developer and builder Matt Stroud. “You could say it’s the brainchild of Matt and Malcolm, with the labour and influence of myself,” says Jack.

“The house is a mix of myself, father and partner with forward thinking and logistics. Whereas I am good at what looks nice and works for modern day families, they are good at the practical side of things. There is a great synergy between the three of us.”

Residential architect Day Tanner in Wokingham designed the build. Jack knew he could trust them as it was this firm that designed the house Jack grew up in, in nearby Binfield Heath.

“My father built it and it’s still a beautiful house, today. With Four Winds, you can be sure that we have put in the same quality and effort. In fact, we are so pleased with the house that it’s going to be hard to part with it.”

The property has a well designed, spacious layout with quality oak joinery throughout including oak flooring on the ground floor. Naturally, the pièce de résistance is the 26ft kitchen/dining/family room, with its obligatory doors which open out onto the garden. This is a superb 160ft south easterly-facing space that’s mainly lawn, with a fantastic screen of mature trees along the boundary.

Back inside, the kitchen is an excellently designed space that really impresses. There is a huge island unit, plenty of (granite) worktop space, and high end appliances such as wine fridge, twin electric ovens, induction hob and a freestanding American-style fridge-freezer. It’s everything you could want in a family kitchen.

When the kids aren’t sitting alongside in the dining area, there is also a family room for them to escape to, plus a living room for a bit of quiet time.

Also on the ground floor you’ll find a WC just off the hall (with disabled compliant doorway), and a decent sized utility room which has side access (great for all those muddy wellies).

Upstairs are four double bedrooms (some with fitted wardrobes), and three beautifully designed, neutral-paletted bathrooms, two of which are en suite. Plenty of space for parents, kids and guests alike - and no bathroom squabbles.

Along with a parking area through large wooden gates to the garden, the property has plenty off road parking to the front which has been made into a gravelled area.

What’s also important to note is all the stuff that’s not immediately apparent, such as underfloor heating throughout the ground floor, Cat 5 E wiring, and more eco-friendly bio-digester for the private drainage system.

All in all, Four Winds is a bit of a masterpiece.

“The sense of achievement with this project has been immense,” adds Jack. “From the early days digging ditches, right the way through to the finer details such as decorating the living room fireplace, I’ve thrown myself into this property completely.

“I am now moving onto more local projects with the aim to provide the local public with desirable homes in Berkshire, Buckinghamshire and Oxfordshire.”