Shame to have to choose between polar opposites 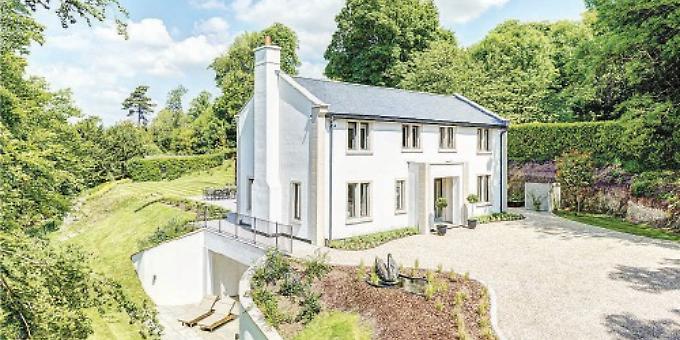 THIS week, we give you a tale of two pretties.

Both properties offer the best of times, in the worst of times — that being the January-February blues!

And like Charles Dickens’s characters, one can be found in the heart of a bustling social centre while another resides in a leafy oasis.

Both offer facilities to park your cars — yes, plural — but that is where the similarities end. The biggest difference is in price and style. In that respect, these two properties are polar opposites.

First up, we have four/five-bedroom Underwood — named for a previous property which once stood on the same plot.

A luxury contemporary dream of glass and architectural cleverness, this is a property which offers oodles of space and luxe practicality along with wow-factor panache. And when we say wow factor, that’s both inside and outside.

While the design of the property gives a front approach that’s akin to a neo-Georgian manor, once inside you discover that this is a completely different animal.

Underwood is a property of light and space over three floors, all of which are connected via the central open plan atrium.

High up on White Hill, behind Remenham Lane and Matson Drive, this is a house specifically designed to make the best of its stunning position. The views of our town and the Thames Regatta finish line is magnificent.

Accommodation is well laid out and offers all manner of comforts and contemporary coolness. On entering the property by the front door, it’s that massive open-plan atrium that sets the tone — you know you’re in for a treat.

The outstanding vista can be glimpsed even from this position in the house, past the staircase and through the north-west “wall” of glass windows that extends from this ground floor upwards to the first floor.

The lower-ground floor, too, has sliding glass doors. Needless to say, valley-facing sides of the house manage to let a considerable lot of light indoors, in turn showing off what lies beyond.

Adjacent to the front door is both a cloakroom and a guest WC.

To the left of the entrance hall is a drawing room, which is triple aspect (as they call it) with a characterful fireplace as the central focus. This also has glass sliding doors to the garden terrace, which wraps around the house all the way to the more-contemporary sitting room, which is positioned on the other (east) side of the house.

To the right of the entrance hall, there’s a decent-sized study. But walking straight ahead on this ground floor will bring you to the rather lovely designer kitchen-and-family/dining room combo, with a well-planned prep room positioned just behind it (out of sight, but easy for keen cooks to get to).

The aforementioned sitting room connects to the kitchen/diner here, and both rooms have sliding glass doors to the garden terrace — and those views.

Designed as the focal daily living space, the sitting room has a gas-powered feature fire, TV point overhead, and surround sound speakers. Sleeping accommodation is on the first floor, including the spectacular master bedroom which occupies an impressive corner position with its very own private roof terrace, and en suite bathroom and dressing room. Just imagine bathing in that freestanding bath while gazing down the valley.

There are three more bedrooms on this floor — one is the guest suite with its dedicated bathroom, and two further bedrooms share a bathroom via interlocking doors.

Underwood’s “hidden” lower ground floor hides its practical necessities well — plant/boiler room, store room, utility room — as well as having a touch of adult playtime about it. Take your pick from a gym, spa bathroom, cinema/games room and wine store.

The gym has those previously mentioned glass sliding doors which open on to a sun deck, too. (Cor! Talk about wow factor.)

Speaking of the outside, the pagoda BBQ area at the end of the garden terrace is a rather spectacular spot. On your way there, don’t get distracted by the view — you’ll need to dodge the sleek sunken pond feature unless you’re up for an unplanned plunge.

All this, and it’s set in half an acres of landscaped garden, with lots of mature screening to hide the property from White Hill road (A4130). A long driveway — through electric gates — also helps with privacy. Last but not least, there’s a triple garage block adjacent to the house containing some very smart secondary accommodation.

All in all, this is a gorgeous property on the edge of Henley, with great prospects. Literally.

And this brings us on to our second property, which has some great prospects of its own, albeit in a very different way.

A two-double bedroom, two bathroom apartment over the top of Bell Street’s well-known interiors shop Anne Haimes, the views from the front are great… for people-watching. And if you need a pint of milk in a hurry, you need but quickly saunter across the road to Waitrose.

The apartment is on the middle floor of a building that was constructed in 1899, which means those who prefer their property to have a bit of character and class will be well pleased. Rooms are light and airy with high ceilings, original sash windows and more.

The current owners have not only made the most of the space available to them with a clever layout, but have managed to stay true to the heritage of the property.

(The vendors have also mastered the art of interiors magic, so perhaps they were channelling Anne Haimes, directly below the living room?)

The apartment’s décor is both charming and modern in all the right places, with furniture that doesn’t overpower the space in which it resides. Due respect is given to original features such as beautiful bay windows and the cast iron fireplace, which is gas-powered.

That said, there are contemporary additions in all the right places — such as video entry system, heated towel rails, rain showers, push-open sleek white kitchen cabinets, a half size dishwasher and an integrated washer-dryer.

Katharine Sivyer of Simmons & Sons, which is marketing the property, said: “The current vendors bought the flat from us in March 2014. Choosing to sell with us hopefully indicates great customer satisfaction. After all, we were the vendors’ first choice of agent!”

The vendors have said that they bought the apartment as a “pad for family and friends to enjoy when they come to visit Henley”. They also said it is a winner of a rental during peak holiday seasons, such as Henley Regatta and the Henley Festival. Especially since it has that parking for two cars in a secure gated courtyard (gates are automatically locked each night).

However, Standard Property thinks this property would also be a brilliant first-time buy. After all, for £400,000, you’ll be getting those tick boxes of a two bedroom/bathroom apartment with parking, right in the middle of bustling Bell Street.

A lack of outdoor space is made up for by proximity to the town’s parks and the River Thames area. Plus it’s a five-minute-or-so walk to the train station.

A great find. Standard Property doesn’t expect this one to stick around on the market for long — as is also true of the larger, more contemporary Underwood on nearby Remenham Hill.

Town or country, big or small, modern or character — in an ideal world, which of the two properties would you choose? With both properties being so special, it’s surely a matter of double or nothing.

• Reception rooms: four, plus a lower ground floor containing a gym and a games/cinema room