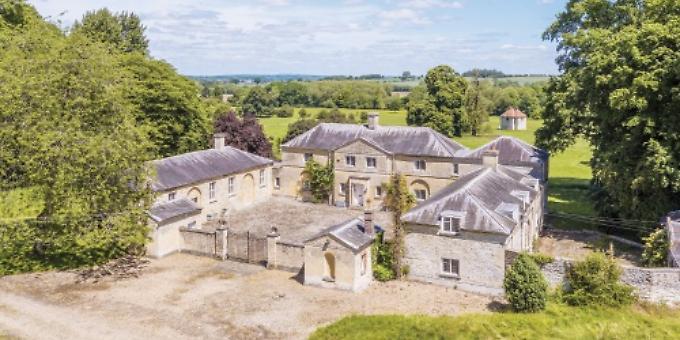 BRIGHTWELL Park, the
135-acre country estate at Brightwell Baldwin, is on the market with Savills at a guide price of £8million.

The estate is believed to be owned by Anish Kapoor, who famously designed the Orbit sculpture at London’s Olympic Park in 2012.

Brightwell Baldwin is a tiny picturesque village overlooked by the Church of St Bartholomew and a 300-year-old pub, and is known to have been used as a filming location for several episodes of Midsomer Murders.

The Brightwell Park estate is set in mature parkland with elegant tree-lined avenues and tranquil lakes, deep in the Oxfordshire countryside with stunning views of the Chiltern Hills.

It is conveniently located close to the market town of Watlington, halfway between Henley and Oxford.

Included in the sale of this unique property is the main house, six other residences, the ruins of an old mansion, a walled garden, farm buildings, stables and a number of quirky, historically interesting features.

A fine example of classic Georgian architecture, the house was built using local stone in 1789 and was originally used as a coach house and stables. It was converted to become the main house in 1947.

Brightwell Park is an unusual U-shaped building that surrounds a cobbled courtyard on three sides, with a grand entrance and imposing iron gates on the fourth side.

The reception rooms include a sitting room, dining room, study and a drawing room featuring a large stone fireplace. The kitchen has been updated and now includes a larder and a breakfast bar.

There are a number of additional rooms in the west wing of the ground floor, with four bedrooms and two bathrooms on the first floor.

The original 18th century mansion, Brightwell House, used to be the main living accommodation prior to 1947, and is situated close by on the other side of another courtyard.

This mansion, thought to have been built by eighteenth century architect James Wyatt, is now divided in two.

One half remains intact — a classic three-storey Georgian beauty known as Dower House — and has been converted into three separate flats with views over the park.

Underneath Dower House there are a number of rooms once used as kitchens and domestic quarters that have not been lived in for over 70 years.

The other half of the original mansion was partly demolished shortly after the Second World War, and now remains as a spectacular ruin with four ground floor walls and the old front door — but no roof. Beneath the shell of the ruin there are vaulted cellars with paved floors.

There is tremendous potential here to build a magnificent new Park House on the site of Dower House and the old ruin — subject to planning permission — because these buildings are not listed.

In addition to Brightwell Park, Dower House and the ruin, a number of other properties on the estate are included in the sale.

There are two Grade II listed Georgian lodges at the gates of the park. Eagle Lodge is a cosy one-bedroom home at the main entrance, overlooked by two enormous stone birds on the gateposts keeping an eagle eye on who is arriving, and Cedar Lodge is a two-bedroom cottage at the east entrance.

Beech Tree Cottage is a modern three-bedroom brick cottage close to the farm buildings and stables.

At the east end of the village of Brightwell Baldwin there is a separate entrance to the estate that leads to several farm buildings and six stables.

The Brightwell Park estate is also home to a Grade I listed two-storey limestone dovecote, built in the early 17th century on the site of an Elizabethan house that tragically burned down in 1787. The dovecote has windows on the first floor and bird nesting boxes and ledges on the inside.

There is also a Grade II listed ice house in the park, dating back to the 18th century.

Cedar Avenue, thought to be one of only two tree-lined avenues of its style and age in the country, gently winds through the estate and over the Grade II listed Waterloo Bridge.

An avenue of lime trees known as Lime Walk leads from Brightwell Park to a large walled kitchen garden — not currently in production — with Grade II listed stone walls.

The Brightwell Park estate stretches across an impressive 135 acres of rolling green countryside, comprising 21 acres of woodland, 75 acres of grazed parkland and 29 acres of pasture.

This is a rare opportunity to purchase a beautiful unspoilt area of parkland close to Henley, steeped in history and with good potential for development.

• Land: around 135 acres in total with shooting and fishing rights