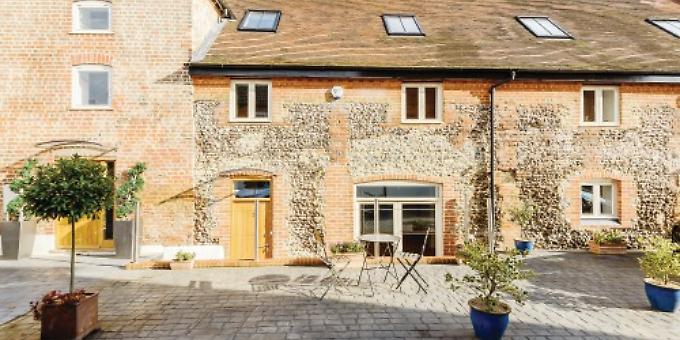 TWO of the recently renovated homes at The Maltings behind 18 Hart Street are on the market with Knight Frank.

The house and the apartment are within an 18th century Grade II listed range of malthouse buildings that have been successfully transformed into six gorgeous town-centre dwellings and office space.

The Maltings is an impressive example of an old Henley malthouse — and many of its original features were still in good shape when renovations began in 2016.

The words “malt” and “Henley” are often used in the same sentence — but what is malt, and what does it have to do with our pretty home town on the Thames?

The answer lies in your pint of bitter.

Malting is the process of turning grains — usually barley — into malt, an essential ingredient in beer.

Malt is also used in whisky distillation and food production — Malteser anyone?

The malting process is pretty much the same today as it was around 1750, when the original malthouse behind 18 Hart Street was built.

To begin with, you spread your pile of barley grains out on the floor to dry for a while.

Then you soak them in water for two or three days until they germinate and start sprouting little shoots.

You then take the grains out of the water and lay them on the floor for a few more days, turning them frequently to let them sprout properly.

Next you toast your little sprouters in a hot kiln, and then dry them even more by laying them back out on the floor and blowing hot air over them.

Your pile of barley grains is now a pile of malt — and without malt there is no beer.

During the malting process, the grains develop enzymes that convert their starches into fermentable sugars, which yeast turns into alcohol during the marvellous alchemy of brewing.

So now you know what malt is and why it matters — but what does all of this have to do with Henley?

In the 17th, 18th and 19th centuries, Henley was a busy port town, popular with boats transporting goods along the Thames between London and the countryside upstream.

In those days, the merry people of England drank beer instead of water, because the water was usually dirty and drinking it would most likely make you ill.

So grains were grown and harvested in the countryside and brought to Henley to be turned into malt, before continuing their journey into London to be brewed into beer.

By the early 19th century — when production at the malthouse behind 18 Hart Street would have been in full swing — Henley was booming and home to dozens of malthouses, all busy soaking, germinating, toasting and drying their hoards of barley for London’s thirsty beer-drinkers.

The old malthouses at Brakspear Mews on New Street and behind 57-59 Market Place have also survived and been lovingly restored for future generations to marvel at.

Because malt was so readily available in Henley in the old days, many breweries started up here — most notably Brakspear, which was founded in 1779 and grew to become synonymous with Henley for most of the 20th century.

There are two homes available for sale at The Maltings behind 18 Hart Street — an impressive Grade II listed building at the heart of Henley’s beer heritage.

The three-bedroom house at 3 The Maltings is arranged on three floors with a small terrace and is on the market for £945,000.

The three-bedroom apartment at Flat 1, The Maltings, is set over three levels and has a private balcony with views over the rooftops of central Henley. It is on the market for £1,150,000.

The properties in this gated development can be accessed from the old cart entrance on Hart Street that leads to a quiet enclosed courtyard with oodles of character.

Both homes are quirky and charming, elegantly fitted out for modern living with an open feel and making clever use of light.

Many of the building’s original features, such as the exposed wooden beams, have been preserved throughout.

The Maltings offers a little bit of Henley history and a quiet town-centre location, making it a charming and special place to live.

For more information or to arrange a viewing, call Alexander Risdon at Knight Frank in Henley on (01491) 844900.