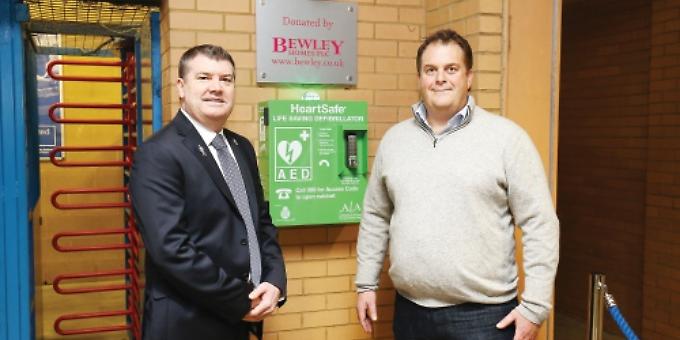 Known as AEDs for short, the handy portable devices can be used to shock a person’s heart to restore a normal heart rhythm when they have experienced a sudden cardiac arrest — a condition that sees the heart suddenly and unexpectedly stop beating.

“In fact, it is responsible for more deaths than lung cancer, breast cancer and AIDS combined.

“Arrhythmia Alliance wants to make sure our loved ones, colleagues and friends are as safe as possible with an AED nearby.”

And thanks to Bewley Homes, Madejski Stadium — a venue that hosts a large number of major events every year — is now very well equipped to deal with emergency life-threatening incidents which might suddenly occur on site. And every second counts when saving a life from sudden cardiac arrest.

A spokesman for Reading FC said: “Each individual’s safety is of paramount importance for a football club who proudly serves its supporters throughout every football season and its local community 365 days a year. We are very pleased to have two brand new AED devices installed and fully operational.”

Bewley Homes managing director Andrew Brooks said: “Bewley is a local developer based in and around the Reading area and, as a company, we like to go that little bit further, putting something back in to help the local community. Our number one priority in placing defibrillators in key public spaces is to help save lives.”

Many public places keep an AED as part of their first aid equipment, including shopping centres, train stations, airports, offices and schools. And the Madejski Stadium now hosts two. The defibrillators can be identified by the noticeable green casing in which they are stored — as well as a green sign above each device.

Members of the public can use an AED with no prior training as the machines analyse a person’s heart rhythm and then use visual and voice prompts to guide users through each step.

The Reading FC spokesman added: “On behalf of all the club’s supporters, we would like to express our gratitude to Bewley Homes and Arrhythmia Alliance for the generous donation of these two devices, which are situated in the entrance to the main reception at Madejski Stadium — between gates three and four — and by the Academy Training Dome with our Community Trust.”

Based in Tadley, Hampshire, Bewley Homes is a private limited company which has been building high quality new homes in highly desirable locations since 1991.