Apartment offers a grand window on to times past 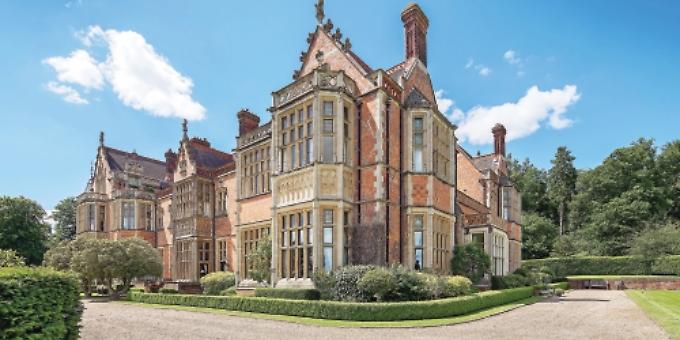 JUST outside Henley, on the way to Stoke Row, is a fairytale Victorian Gothic mansion set deep within 170 acres of wooded parkland.

When it was built for the MP Edward Hermon between around 1872 and 1874, Wyfold Court was one of the grandest country houses in all England.

This Grade II listed property was renovated and converted into 11 prestigious mansion apartments in 1999.

Apartment two is the largest, south-facing property, and is being jointly marketed by Robinson Sherston of Henley and Humberts of London with a guide price of £1,999,950.

The property’s owner, Susan Bedack, gave me a tour of the apartment, and we chatted about its history while drinking coffee at the long dining table in the drawing room.

“Part of this building was used for soldiers convalescing after the war — it was also a psychiatric hospital, Borocourt,” she told me.

“Most of these old buildings throughout the UK were often used as schools or hospitals — it’s not unusual to have a hospital in a building of this size.

“Many years ago, the very wealthy lived in buildings like this. But as time goes by, we’re living in smaller and smaller properties. During the Fifties, lots of homes like this were destroyed to make way for smaller modern houses.”

The renovation project restored many of the exquisite Gothic features that make this building such a historically significant gem.

The intricate stained glass windows, the stone vaulted corridors, marbled pillars and beautiful tiled fireplaces were all lovingly brought back to life by the developers PJ Livesey, in association with English Heritage.

Having lived in Monaco and Hampstead before moving to Wyfold Court, Mrs Bedack has lived a fascinating life. She is currently chairman of appeals for Sane, a mental health charity, and also campaigns against the legalisation of cannabis.

She plans to downsize to a smaller home after 11 happy years at Wyfold Court.

“One of the best things about living here is the neighbours,” she said. “We all get on well with each other and it is a great place to live for ‘lock up and leave’.”

Entry into the building is through a set of vast wooden doors that open into the communal hall and reception area, where there are many stained glass windows that contain crests and are dedicated to historical figures including past kings and queens of England.

The four-bedroom apartment is very spacious and laid out over three floors.

The carpeted drawing room on the ground floor is simply spectacular, with a 20-foot blue and gold ornate ceiling, dark wood panelling, oil paintings on the walls, massively tall windows with full-length drapes and a carved open fireplace.

The drawing room overlooks the gardens and is perfect for entertaining on a grand scale — Mrs Bedack has hosted more than 90 guests here and the room still wasn’t full.

The reception hall has its original wooden parquet flooring, and leads to a freshly decorated open-plan kitchen, a guest cloakroom and a guest bedroom suite with a delightfully sunny morning room at one end.

A sweeping staircase leads up to a mezzanine floor where there is currently a study/office and a seating area with a balcony that overlooks the reception hall.

On the first floor there is a lovely en-suite bedroom with the prettiest fruit chandelier in the world, made from Italian Murano glass.

The master bedroom suite is also most chandelier-worthy and has a remarkable view of the countryside to the south. The top section of the windows has stained glass panels adorned with dainty yellow flowers.

The second floor could easily be used as a self-contained apartment, as it has a bedroom, a kitchenette and a bathroom. It also has a balcony for sitting out on and soaking up the sun, with jaw-dropping views over the Wyfold estate.

Wyfold Court is to be found down a private tree-lined road, Lime Avenue in Kingwood, and is set within eight acres of formal gardens featuring a stunning Grade II listed fountain and two tennis courts for residents and their guests to enjoy.

There is plenty of space to park cars at the front of the house, and further secure parking for two cars in an underground car park that also has a storage room.

The apartment owners collectively own the landscaped gardens around the mansion, and a management company takes care of the common areas and grounds — which include 177 acres of parkland.