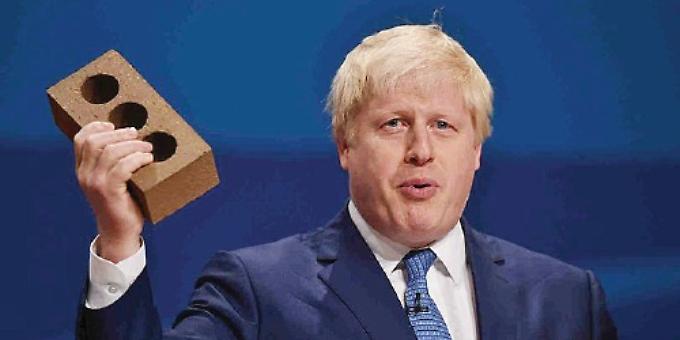 Writing in the Daily Telegraph on Monday, he warned that property developers are operating an “oligopoly” by banking land and building poor quality homes because they know first-time buyers are just grateful to get a foot on the property ladder.

Side-stepping the controversy over his recent remarks about the burka, Mr Johnson said it was a “disgrace” that Britain now has lower rates of owner-occupation for the under-40s than France and Germany — having previously enjoyed a reputation as a great home-owning democracy.

And he warned of an impending crisis of confidence in capitalism if the government cannot help young people buy a home.

With this in mind, Mr Johnson took aim at stamp duty, the tax most house buyers have to pay, writing: “We need to kickstart the market in London — which drives the rest of the country — by cutting the absurdly high stamp duty; because that tax is freezing whole chains of purchases as people are deterred from trading up, with the result that older people are staying in houses that are too big for their needs and younger families don’t get a look-in.”

During his time as the Mayor of London, Mr Johnson had called on the government to allow City Hall to keep the housing taxes it raised.

In a 2014 speech to the Conservative Party conference he clutched a brick in his hand as he boasted of home-building plans that would necessitate one billion bricks.

Support for Mr Johnson’s latest views came from James Brokenshire, the housing secretary, who told BBC Radio 4 that the government’s recent cuts to stamp duty had benefited 95 per cent of first-time buyers, adding that he was looking at further ways to “promote home ownership”.

Speaking on Monday morning, he added: “My focus is actually dealing with some of the challenges that Boris highlighted in the Telegraph today.

“How we see greater home ownership, how we actually drive that housing agenda, and I look forward to discussing that with Boris and other colleagues.

“If you look at what we’ve done, we’ve actually had benefit for about 95 per cent of first time buyers, and this will have an impact on one million people.”

In his column, Mr Johnson wrote that the lack of affordable housing is “the single biggest and most urgent crisis we face”, adding: “It is not just that things were so much easier 30 years ago, when I left university and went looking for a flat. It was only 10 years ago, for heaven’s sake, that the proportion of owner-occupiers among 25- to 34-year-olds was still up at 64 per cent. That figure has now plummeted to 39 per cent — more than half the key generation shut out of the housing market.

“This is meant to be Britain, the great home-owning democracy, but we now have lower rates of owner-occupation, for the under-40s, than France and Germany. That is a disgrace; and you can’t expect young people to be automatically sympathetic to capitalism when they find it so tough to acquire capital themselves.”