Seven-bed townhouse is in a royally good location 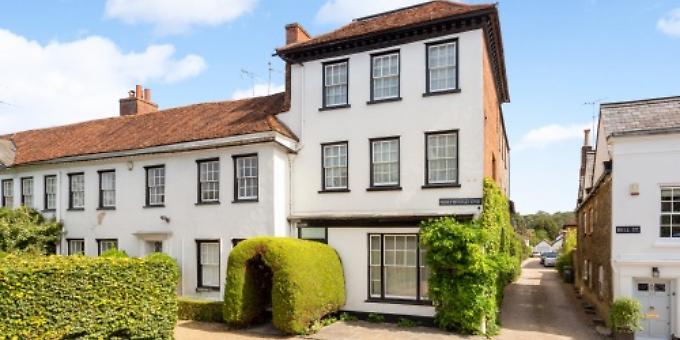 DENMARK House is a unique Grade II-listed townhouse in the centre of Henley, with a centuries-old royal connection.

On the market with Savills at a guide price of £2,500,000, the property has seven bedrooms and a swimming pool in the back garden. It dates back to the early 17th century, although some parts were added on later.

It is believed that Prince George of Denmark and Norway stayed here once, hence the name Denmark House.

Prince George had been married off to Queen Anne of England in the 1680s — Anne ruled between 1702 and 1714 — in an attempt to build an Anglo-Danish military alliance. Interestingly, George’s brother-in-law, William III of Orange, was also married to Anne’s older sister Mary.

When William and Mary occupied the throne, they prevented their married siblings from having any real power, but eventually they died and Anne became Queen with Prince George at her side as her consort.

Denmark House was once owned by the Fawley Court Estate, and it was lived in over the years by various estate managers.

This property, sitting head and shoulders above its immediate neighbours, has an immense amount of character, with high ceilings and sash windows and living accommodation arranged over three floors.

The front façade is white stucco, with a window that looks likes it was once a shop window on the ground floor, and the long wall that stretches down Bell Lane is brick and flint.

The front door, accessible through a quirky archway grown out of a hedge, opens on to a long hallway and a door into the drawing room, which leads through double doors into the family room.

The handsome drawing room has windows at the front and side, and has fitted bookshelves and cupboards and an electric wood-burning stove inside an open fireplace.

The kitchen, accessible via a rear lobby towards the back of the house, leads into a lovely bright garden room, where there is access to the back garden and a loggia.

The house has two staircases leading up to the first floor, where there is another sitting room with wall panelling and an original fireplace, at the front, along with three of the bedrooms and a large bathroom.

The remaining four bedrooms and another bathroom are up another level on the second floor, and two of these bedrooms are en suite.

The southwest-facing walled garden is a real delight. It has a swimming pool — a rare luxury in the middle of Henley — in an area screened from the main garden.

The garden has a large paved patio with a small pond and a water feature, along with a wide variety of colourful trees and shrubs and other interesting design features. There is designated off-street parking for four cars plus a car port, and the property also has a cellar.

Denmark House is located at 2, Northfield End, along Bell Lane — a tiny private road off the end of Bell Street just before the main road out of Henley splits off towards the Fair Mile and the Marlow Road. The property has the advantage of there being no onward chain. For more information or to arrange a viewing, call Savills Henley on (01491) 843000.